The following is a transcript of a webpage. The original can be viewed here.

All sentences in brackets have been added by the transcribing EVA database operator. 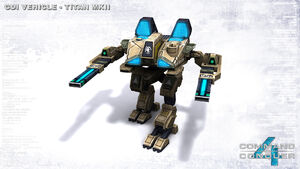 The Tiberium Wars have spanned decades, with constant advances in military science spurred on by each faction's urge to prevail over a bitter enemy. Combat has ranged over every imaginable terrain and every corner of the planet. Such sweeping conflict has given rise to multitude of specialized combat teams, with GDI's Steel Talons ranking amongst the most decorated. The Steel Talons specialize in heavy armor, bringing the fight directly to the enemy wherever they can be found. Their straightforward methods require that they employ the most resilient weapon platforms, heavily armored vehicles with powerful guns.

To this end, in the years before the Third Tiberium War, the Steel Talons began development on the second generation Titan walker. The plans called for top-tier robotic technology, diamond-hard battle armor, and legs able to traverse jungle, marsh and rocky terrain more easily than conventional tracked vehicles. The result was the Titan Mk. II, which saw years of service at the hands of the Steel Talons before being pulled out of service in favor of the less expensive Predator Tank.

Hundreds of Titans were relegated to "mothball status," sitting in GDI armory warehouses, diminishing into disrepair. Some were even converted into heavy industrial equipment, outfitted with shovels or cranes to aid in the construction of the Blue Zones. But the grizzled veterans of the Steel Talons still had many fond memories of the Titan Mk. II as a faithful war machine. For years they petitioned to bring the reserves of the Titan back into service, to no avail. It was the development of the Crawler which ultimately tipped the scales in their favor with the bean-counters at GDI High Command HQ. GDI needed to deploy powerful laser-weapons to cut through the heavy armor of the Nod Crawlers, and it had to happen fast, so the Titans were pulled out of storage and retrofitted with a number of upgrades which could be easily mounted on the heavy internal frame. The Titan was back in action.

Since that time, the Titan has shown new life as a front-line armored walker. They are typically deployed to attack Nod crawlers with armor-piercing lasers, but they fare well in any combat scenario, even knocking out Nod's heavier air targets, such as the Basilisk and the Gorgon (note: this appears to be the original name of the Medusa). It has at last earned its place beside the Mammoth Tank in the distinguished war records of GDI. 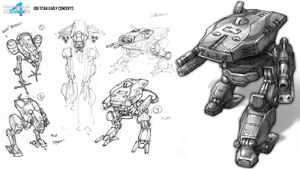 Early in the 21st century the Titan was developed as an alternative to GDI's main battle tank. No expense was spared, as cutting edge technology combined locomotive designs, first tested in the Wolverine power-suit, with a skeletal frame forged from the world's strongest materials. The result was a powerful, yet expensive, armored walker. Many of the first Steel Talons' commanders were former "Titan Jockeys," so it was only natural that they would initiate development on the Titan Mk. II when the time came.

The Titan utilizes a complex array of alloy spars, high-tech servos and fibrous tendons which allow high-speed locomotion upon two armored legs. The materials required to build this system are expensive, but the Titan is able to move fast enough to keep pace with most tracked vehicles in battlefield conditions. The legs are able to balance the crew compartment and power plant while also bearing the weight of over 20 tons of advanced battle armor. The elevated turret affords better command-seating, granting the gunner a clear shot regardless of impeding terrain. This is especially important when the Titan is hunting high-value targets, such as roving Nod Crawlers.

Upon first deployment the Titan Mk.II was equipped with an anti-tank cannon, much like its predecessor. The Titan saw no action in the Third Tiberium War, but was eventually called back into service as a heavy weapons platform. GDI Engineers discovered that the robust internal frame was not only well-suited to carrying a heavy laser, but could also readily sustain a variety of other enhancements. Over time, variations of the Titan Mk.II became outfitted with increased charge capacitors for the main laser, higher quality beam emitters for improved engagement range and updated power-train components for heightened speed. Recent models even boast a second heavy laser, sealing the Titan's fate as one of the most versatile weapon platforms in history.

Retrieved from "https://cnc.fandom.com/wiki/AW-T2_Titan/Profile?oldid=219895"
Community content is available under CC-BY-SA unless otherwise noted.