A House Unfit for Rebels was the next stage in the Allied operation to crush the rebellion posed by the renegade Imperial Shogunate leaders in Japan.

The Allies' next target was Kenji Tenzai, whom Tatsu warned the Allied Commander that while Kenji maybe such an arrogant and hot-headed Commander unlike Shinzo Nagama, Kenji was still a cunning and modernised tactician nonetheless. He was last reported to be in the Osaka Province that is heavily defended with modified Nanoswarm Hives.

The Allies still used most of their arsenal to put down the Imperial rebellion. The new addition was the Cryo Legionnaire, an infantry unit capable of freezing any incoming assaults to a halt. Kenji utilised mainly an Imperial arsenal that was focused around latest technologies and weaponry, including the Steel Ronin and his own personal black King Oni.

Before the Allies could make their assault on Kenji's HQ, they first had to deactivate the three Nanoswarm Hives that made the estate invulnerable to attack. In three separate raids, three Century Bombers paradropped Javelins, Spies, Peacekeepers and Engineers to disable the Imperial defenses and then deactivated the Hives. This caused the blue shield to malfunction and disappear completely around Kenji's HQ, which surprised the rebelled shogun.

With all three Nanoswarm Hives deactivated, the Allied Commander was now given access to the Allied arsenal which includes a new addition - the Cryo Legionnaire. Kenji's assaults on the Allied base ranged from his Imperial infantry to the Steel Ronin and even his loyalist naval forces, but they were all 'cooled off' by the Cryo Legionnaires. The Allied Commander decided to replicate the results from his recent battle with Shinzo and used the Harbinger Gunships escorted by the anti-air Apollo Fighters to root out Kenji's forces. Prince Tatsu also granted the Allied Commander some Archer Maidens and two King Onis if the Engineers can repair the two bridges impeding their arrival. Tatsu also requested the Allies to send the Imperial Engineers to capture Kenji's Instant Dojo and Mecha Bay. With both tasks completed, the Harbingers wiped out Kenji's base and eventually destroyed his headquarters.

Just before the Allies could arrest Kenji, he was spotted retreating from his HQ in a black King Oni. What was worse was that one of the Allies' own Technology Inhibitors was detected and brought online, but bringing most of the Allies' weaponry offline and unable to pursue Kenji. Luckily, infantry was unaffected so a Century Bomber air dropped 4 Cryo-Legionnaires and Special Agent Tanya to pursue Kenji and destroy that Tech Inhibitor. After waves of Kenij's remaining troops were frozen and cut down, the Cryo Legionnaires found Kenji's King Oni and proceeded to cryo-freeze him, while Tanya destroyed the Tech Inhibitor. The Black King Oni was frozen and Kenji was teleported by Chronosphere to the military detention center.

The arrest of Kenji Tenzai meant that the Allies now had one target remaining - young Takara Sato - to crush the Imperial rebellion. As the Allied Commander prepared to assault Miyako Province, he didn't notice that Prince Tatsu was secretly rebuilding the Imperial military for one last battle...

The player will start with sneaking into Kenjis bases to destroy the nanoswarm hives that defend his HQ.

After the mcv deploys the new unit is the cryo legionnaire which freezes enemy targets and use the boast kick to shatter frozen targets.

The enemy will use the Steel Ronins robots that make micemeat out of tanks including mirage tanks.

After Kenjis HQ is destroyed the next part of the mission will result in all air, land and sea vehicles disabled with infantry unaffected.

Tanya and some cryo legionnaires along with any nearby infantry will appear to capture Kenji. Use the cryo legionnaires to freeze the enemy troopers and Kenjis King Oni(Destroying the Oni results in a mission failure) and tanya to blow up the Tech Inhibitor. 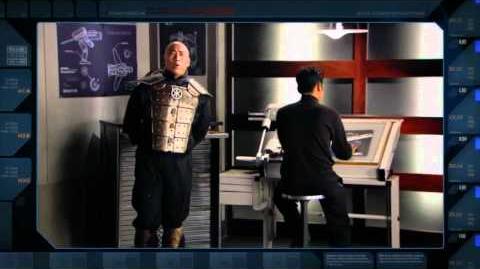