The armour was not a passive system. Upon activation it conferred greatly improved durability and immunity to EMP at the expense of the vehicle's rate of fire and mobility. This could be advantageous or disadvantageous depending on the situation.

When activated, the armor system effectively reduces all incoming damage by 30% - equivalent to an approximate 43% boost to overall health (almost equivalent to the full heroic veterancy health bonus of 50%). This acts as a substantial boost to the Titan's already strong armor, but really shines when activated on Mammoth Tanks: whose massive health pool makes exceedingly good use of the ability—possessing resilience that puts even GDI's own Mammoth Tanks to shame.

The armor bonus is so substantial, that in a pitched battle between identical units - with and without the armor active, the armored variants often come out on top, even with the significant reduction to their rate of fire.

Adaptive Armor also importantly allows Titans and Mammoths to completely ignore the disabling effects of EMP: whose primary usage lies in disabling high-value units for ease in bringing them down. All these advantages combined with support from repair units available to the Steel Talons such as Mobile Repair Transports and Rigs make Steel Talons mechanized forces very difficult to destroy.

Adaptive armor may be used in conjunction with Railgun Accelerators to negate the slower firing rate. With this approach, the armor is able to partially mitigate the damage inflicted on the vehicle by the accelerator. Though in general, the armor should only be activated on units that are being focused down by the enemy, since railgun-equipped units with inactive armor benefit far more from the Accelerators, and their very limited active duration. 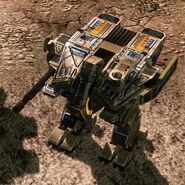 A Titan upgraded with adaptive armour 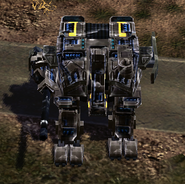 A Titan with adaptive armour activated 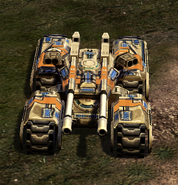 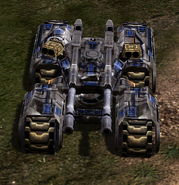 A Mammoth Tank with adaptive armour activated
Add an image to this gallery
Retrieved from "https://cnc.fandom.com/wiki/Adaptive_armour?oldid=228575"
Community content is available under CC-BY-SA unless otherwise noted.