Adela "Nitro" Baskova is a GLA general expected to appear in Command & Conquer (Generals 2). She succeeds Rodall Juhziz as the Demolitions General of the Global Liberation Army.

Born in a refugee camp on the Russian-Georgian border and orphaned soon after, Adela Baskova spent much of her young life begging on poverty stricken streets of Grozny. A chance encounter with a GLA bomb-maker led her in an entirely different direction; the terrorist took the young girl under his wing and trained her in the art of both making and placing high impact bombs. Following her mentor's death at the hands an EU special forces team, Adela crossed the border into Western Europe and launched a one woman campaign of explosive terrorism for over a year. Finally arrested and sentenced to death, Adela engineered her own escape using a series of improvised explosives and made contact with the local GLA terror cell. Today, she is the pre-eminent demolitions specialist within the terrorist organization, her skill, determination and toughness belying her small frame and quiet nature.

Nitro prefers close-range attacks for her tactics to be effective. As such she will need to close the gap between her forces and enemies, giving her foes some time to prepare for her assault. This means that any enemy units with mid-range weapons (for example General Cleaver's railgun squad) will make it difficult for Nitro to attack. Once in range however, the results will decimate anything in a small area. 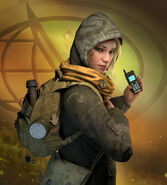 Retrieved from "https://cnc.fandom.com/wiki/Adela_Baskova?oldid=215514"
Community content is available under CC-BY-SA unless otherwise noted.