The advanced guard tower (AGT) was a GDI defensive structure utilised during the First Tiberium War. It was used as an all-round fortification, being adept at engaging both ground and air targets effectively.

Following the war, the tower was decommissioned and its function was split between RPG and SAM upgrades for component towers by the Second Tiberium War.

The AGT fires salvos of missiles that are highly effective against infantry and light vehicles. Though the missiles are not especially effective against heavily armored vehicles, the advanced guard tower itself is extremely durable which allows it to win duels against limited numbers of tanks. The AGT is also capable of engaging aircraft, making it a versatile all-around defense structure. That said, to counter heavily armored vehicles efficiently, will still require support from medium and mammoth tanks in the base.

When facing an AI opponent possessing a Temple of Nod, it should be noted that the AI will prioritize AGTs with its nuclear missile. A good way to avert nukes raining down on the player's base is to build a line of sandbags extending a short distance from his base, then placing an AGT at the end. Provided this is the player's only AGT, the AI will then target it with its nuclear missile and leave the rest of his base unharmed. 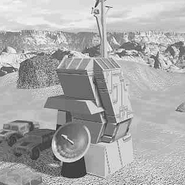 Retrieved from "https://cnc.fandom.com/wiki/Advanced_guard_tower_(Tiberian_Dawn)?oldid=241378"
Community content is available under CC-BY-SA unless otherwise noted.