The Aircraft Carrier was the Allied heavy bombardment ship first seen during the Third World War.

Thanks to a German breakthrough in drone technology, the aircraft carrier is equipped with network of automated drone manufacturing-and-launch bays, which can be maintained and operated by a modestly-sized crew. Every carrier contains a full complement of Sky Knight-class UCAVs, each of which is armed with a powerful 500 lb. armor-piercing bomb similar to Jethro gravity bombs commonly used by the Century bombers, effective in long-range engagements against fortifications and installations.

In addition to the Sky Knight UCAVs, the carrier also possesses a firing mechanism for the Blackout Missile, a tactical warhead whose blast overloads all known electrical systems in its area of effect.

Like all heavy bombardment ships, the aircraft carrier is defenseless against enemy ships that have closed in and aircraft. Losing an aircraft carrier is very costly, so it needs to be escorted by other ships, such as Riptide ACVs and Hydrofoils, at all times.

Its drones are too slow to be useful against most moving targets. So they are best used against enemy structures and base defenses. Though it should be noted that the drones can be shot down, and that all drones self-destruct once the carrier that launched them is destroyed.

Its Blackout Missile can temporarily disable all vehicles and structures in a large area, which can be used to paralyze large groups of enemy vehicles or shutdown an enemy base, making them easy pickings. However, this also affects friendly units in the area. The EMP duration can be increased with the High Technology upgrade.

Close-up of the Sky Knight UCAV

Early model, based on the unused concept art
Add an image to this gallery 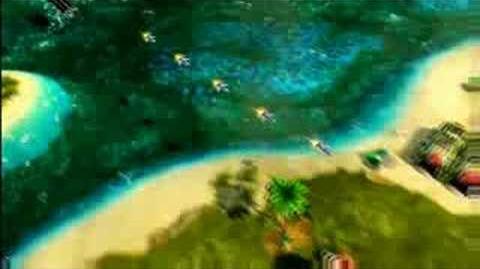