The Airfield was the Soviet aircraft production structure used during the Third World War and The Uprising.

It is consisted of a main assembly hall and four landing pads for MiG fighters (two on each side of the main hall), an air tower, and a great statue of a Soviet pilot. Unlike the Allied Airbase, the planes could not be repaired at the Soviet Airfield. This is compensated through the Crusher crane.

Aircraft constructed at the Airfield 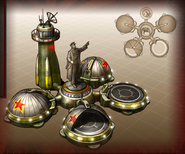 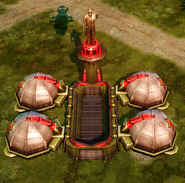 The central hangar opens to release a Kirov 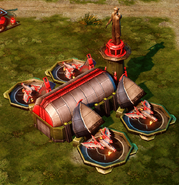 With four MiGs
Add an image to this gallery
Retrieved from "https://cnc.fandom.com/wiki/Airfield_(Red_Alert_3)?oldid=237673"
Community content is available under CC-BY-SA unless otherwise noted.