The airfield was GDI's forward operating base for aircraft during the Third Tiberium War.

Four landing pads allow VTOL aircraft to be rearmed and refuelled. If desired the pads can become enclosed hangers. Like the war factory the airfield uses aerial repair drones. The drones repair not only landed aircraft but also those in a holding pattern nearby.

Aircraft draw critical support from their base airfields even when in flight. Without a data link to the parent airfield, ion particle activity could prevent extended operations or result in guidance failures. In other words GDI aircraft will run out of fuel and crash unless they have not expended their payload.

An airfield has four pads and each pad may only be occupied by one Orca or Firehawk at a time. The pad is considered occupied even if the aircraft is in flight. Once a pad become unoccupied the airfield may construct another Orca or Firehawk. This means fielding more than four Orcas or Firehawks requires more airfields or Combat support airfield to be built. Captured air units from other factions can also land for repair and rearm (if they need to do so and can fit in by sizes).

On the other hand, the airfield may support an unlimited number of Hammerheads. Hammerheads do not need to land to rearm. 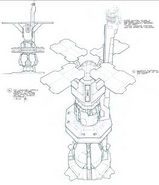 Early airfield concept (recycled as the air tower for Nod) 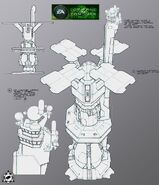 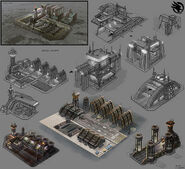 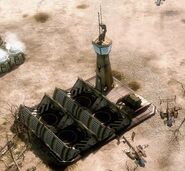 Airfield with a full complement of four Firehawks

Ceramic Armor, indicated by the stack of ceramic armor plating beside the control tower.

Hardpoints as represented by the ordnance beside the control tower. The Stratofighter upgrade is directly behind the Hardpoints upgrade.

Retrieved from "https://cnc.fandom.com/wiki/Airfield_(Tiberium_Wars)?oldid=223465"
Community content is available under CC-BY-SA unless otherwise noted.