The Airforce Command Headquarters was an Allied facility during the Third World War and the Psychic Dominator Disaster that provided three main roles. Firstly, it maintained a radar and secondly, it relayed communications to, and provided a base of operations for Allied VTOL aircraft. It also rendered the Helipad obsolete as the Airforce Command Headquarters became the primary source of aircraft production.

The radar would aid commanders by providing enemy positions to them and to the aircraft and ensured there would be no 'in-air collisions' with friendly airplanes. Harriers, or Black Eagles in Korea's case, were built, repaired and reloaded here. America was also known for using it to organize paratrooper drops via their Airborne network.

In the War of the Three Powers, it was replaced by the similar Airbase, which maintains and repairs aircraft, but does not provide radar.

When an Engineer captures an Airforce Command Headquarters with all planes docked, the Engineer's faction automatically acquires the landed jets. However, if an Airforce Command Headquarters is destroyed while the plane assigned to it is in flight, the plane automatically self-destructs when its missiles are released. A plane can be reassigned to another airbase at will, or if the plane's airbase is destroyed and there is another one in existence with available landing pads. 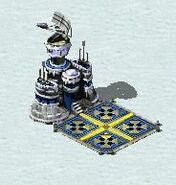 Retrieved from "https://cnc.fandom.com/wiki/Airforce_Command_Headquarters?oldid=230000"
Community content is available under CC-BY-SA unless otherwise noted.