Albert Einstein was a theoretical physicist who made significant contributions to the Allied war effort. He was instrumental in making the Chronosphere a practical weapon. In an alternate Red Alert Timeline, he was later erased from the timeline by Cherdenko.

Einstein was involved with a United States project based at Trinity, New Mexico in 1946 - the project that resulted in the Chronosphere. Einstein used the project to travel back in time to 1924 - with prevention of the Second World War in mind by eliminating the source. There, the scientist met Adolf Hitler, a World War I Austrian grunt who would later become the one large and in charge of Nazi Germany, upon the latter's release from Landsberg Castle after his failed putsch. Seeing this as the perfect moment to change history for the better, Einstein removed Hitler from the timeline, effectively preventing the rise of Nazism prematurely.

Alas, the scientist who would later be the one who made the Allies invincible had not sufficiently thought through the consequences and paradoxes temporal manipulation would bring...

The Second World War as Einstein knew it was avoided, but was unfortunately replaced by another against a burgeoning Soviet Union, which grew in political, economical and military power in the Great Depression. Einstein's reputation was preserved in the new timeline and his expertise much sought after. This was demonstrated as he was captured by the Soviets for work on a new propulsion system, being subsequently rescued by Allied forces.

Back in Allied hands, Einstein worked to perfect a control system for the Chronosphere, resulting in unexpected surprise attacks on Soviet heavy forces. He also lent his expertise in assessing the Soviet Iron Curtain, helping Allied troops strip the Soviets of invulnerability by pulverizing it.

Einstein penned the work called A History of Allied Weaponry.

By the beginning of the Third World War, Einstein was established in a Black Forest laboratory in Germany where he continued work on exotic technologies. After the nuclear threat to Europe from the resurgent Soviet Union was neutralized, Germany released Einstein's expertise to the Allies. Among the new weapons derived from his research were the Prism Towers and Tanks, the Mirage Tank, and the Weather Control Device, a WMD that can unleash a thunderstorm bludgeoning anything within the target area - the very reason why Einstein initially resents its battlefield deployment, calling it "God's toys".

Einstein directed the Allies to deploy the Chronosphere in the Florida Keys.

Altering the Past Again

The Third World War was followed immediately by what Einstein termed the Psychic Dominator Disaster. Einstein's prototype Temporal Displacement Device was used to send a messenger back to the beginning of the Third Great World War and galvanize the Allies to the threat posed by Yuri's Psychic Dominators.

The Soviets also sought to pre-empt Yuri's scheme. They stole Einstein's prototype time machine and returned to the beginning of the Third World War. This time the Soviets prosecuted a successful attack on Einstein's Black Forest lab and destroyed the Chronosphere. This led to the Allies' surrender.

Einstein's time machine inspired the Soviets to create their own, with defeat imminent after the disastrous events of the Psychic Dominator Disaster and the crisis that followed, activating the device to travel back to the Solvay Conference in 1927 and, as their last-ditch attempt to prevent the Union's final collapse, Cherdenko personally erased Einstein, just as he erased Hitler, in a vile act of "chrono-assassination" - much to the dismay of Dr. Zelinsky, who always dreaded the consequences of changing history. As a result, the Third World War was changed with the Soviets on the verge of victory, poised to paint the world red by wiping out the remaining Allied resistance.

But as the Soviets learned the hard way, temporal manipulation was something humanity has no godly right to. Einstein's removal forestalled the development of nuclear weapons, and to make matters worse, that prevented the Hiroshima and Nagasaki atomic bombings of 1945 from taking place, giving life to a new, oriental superpower based on Japan, the Empire of the Rising Sun, in an unchecked hyper-evolution in technological, ideological and military might, leading to the War of the Three Powers.

Who knows what nightmares have the Soviets created with Einstein gone, to paraphrase Dr. Gregor...

Albert Einstein appears in some role throughout all three Red Alert Universe games except for Uprising.

Einstein in Red Alert mission : In The Thick Of It 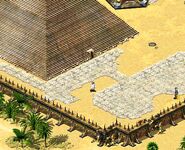 Einstein in Yuri's Revenge mission : Tomb Raided
Add an image to this gallery

Retrieved from "https://cnc.fandom.com/wiki/Albert_Einstein?oldid=231056"
Community content is available under CC-BY-SA unless otherwise noted.