Alexa Kovacs was one of the members of the Brotherhood of Nod during the Third Tiberium War. She worked with LEGION, an experimential combat AI designed by Kane. A beautiful young woman, her fierce and fanatical devotion to Kane turned her paranoid and delusional, and she distrusted General Kilian Qatar's loyalty to the Brotherhood.

Alexa Kovacs was born in a Central African region that later became one of the barren Red Zones contaminated by Tiberium. Her father, scholar and Nod separatist Caleb Kovacs, her mother Ileana and their servants were attacked and brutally massacred by mysterious attackers. According to the mainstream media, their homestead was decimated by Mutant fundamentalists, but evidence gathered by the Brotherhood of Nod revealed that the attackers were, in fact, Nod cyborgs under control of the rogue AI CABAL.

Alexa survived over a year in the remains of her parent's ruined homestead, and was discovered mute and starving by Nod scavengers. She joined the scavengers and proved to be extremely intelligent and practical. Her extraordinary understanding of cybernetics and religious dedication to the Brotherhood were soon noticed by her comrades, and she enrolled in a Nod Academy. Alexa was described as the "Angel of Nod" due to her deep faith in Kane, who valued her coldness, resourcefulness and religious dogmatism. She rose to the rank of abbess and was one of the key figures in the project to develop and upgrade LEGION, an AI created by Kane after the Second Tiberium War.

Service during the Third Tiberium War

In 2046, Alexa awakened LEGION and introduced the AI to Kane, who ordered them to infiltrate an ion cannon network control center in Johannesburg, South Africa, to gain compromising information about GDI's orbital defence matrix. As the Third Tiberium War started with the spectacular destruction of GDSS Philadelphia, Alexa was assigned to brief and assist LEGION. After intercepting a private video transmission, she became convinced that general Kilian Qatar was secretly plotting against Kane.

In her fanatical and delusional mind, she saw Qatar as an insidious traitor to Kane and the Brotherhood. To demonstrate Qatar's "heresy", Alexa and LEGION assumed the guise of General Qatar and her forces to attack Nod's most holy site: Temple Prime in Sarajevo. Alexa and her troops were swiftly defeated by a young and promising Nod commander, but the battle was just a diversion, intended to allow a Nod saboteur to infiltrate Temple Prime and capture data relating in the ion disruption towers. Once the mission was completed, Alexa pulled her troops out and leaked the information seized during the attack to GDI. However, Alexa's success in framing Qatar was short-lived: GDI destroyed the ion disruption towers and annihilated Temple Prime with an ion cannon strike, seemingly killing Kane. General Qatar became the leader of Nod, but Kane, who had survived the destruction of Temple Prime, contacted Alexa and told her that he would punish Qatar for her "betrayal". Sometimes later General Qatar was captured by the same Nod commander who had defeated Alexa and she was executed by the orders of Kane. Alexa was almost satisfactory with Nod about to capture a Scrin Tower and Qatar killed but remained extremely suspicious of LEGION.

As the conflict grew more bloody by the day, Alexa's fear of LEGION began to reach paranoidal levels. With Nod almost victorious of the Third Tiberium War, Alexa began to see LEGION as a threat. Just as LEGION was about to recover the Tacitus in China, Alexa attempted to prevent the AI from being connected to the alien device, as she believed LEGION was plotting to use the immense knowledge of the Tacitus to betray Kane and usher the world into an "age of machines". She infected LEGION with a computer virus and was caught in the act by Kane and his bodyguards.

When the shocked Kane asked why Alexa struck against his greatest creation, Alexa told Kane that she had assumed the guise of General Qatar to attack Temple Prime to expose Qatar's "lack of faith". Kane was not pleased - he had executed one of his best commanders for a crime she did not commit. Kane ordered his henchmen to take Alexa for interrogation and attempted restore LEGION to normal, but she pulled her pistol and pointed at the Prophet. Alexa recited the famous Nod mantra: "Peace Through POWER!" before she shot herself in the head when LEGION malfunctioned due to the virus. As a result Nod lost possession of the Tacitus to GDI.

Alexa's fanatical treason decisively brought GDI's victory after the Italian campaign. In 2052, Kane would regain the Tacitus but Alexa was not credited for any of her work-dead in silence. 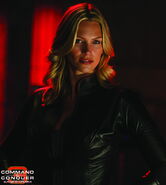 Alexa
Add an image to this gallery
Retrieved from "https://cnc.fandom.com/wiki/Alexa_Kovacs?oldid=186240"
Community content is available under CC-BY-SA unless otherwise noted.