Fled from the Allied attackers

USSR Head of State, Commander-in-chief of the Soviet Military

Premier of the Soviet Union

Premier Alexander Romanov (Russian: Александр Романов) was the leader of the USSR during the Third World War and the Psychic Dominator Disaster.

Although a charming and eloquent man of peace at first glance, Romanov is in reality a dictator consumed by progressing madness. His experiences during the Second World War branded him; memories of foreign troops crossing the snowy streets, burning factories, his homeland crushed by the decadent empire of the west refuse to die and feed a relentless hate of the western Allies. As he grew up, he carefully nurtured this feeling, drawing both from communist ideals and his tsarist roots, drawing up his plan to rebuild the Soviet Union as a superpower.[1]

He realized that the only way to actually be able to execute his plan was to become Premier. He masked his hate well and built up a reputation as a man of peace, an advocate of an alliance with the west. His camouflage was extremely effective - he was hand-picked by Allied intelligence operations to lead the Soviet Union, keep it a declawed tiger.[1] He quickly gained the trust and respect of Soviet citizens and acclaim from western media and politicians.

While the world praised him as a leader, Romanov began putting his plans in motion. With the aid of Yuri, a survivor from Stalin's Psychic Program, he rearmed the Union with the latest in military technology. He used the new World Socialist Alliance, an ostensibly West-friendly organization, to create a global network of Soviet countries that can be used to strike against the Allies.

Alexander Romanov may be relative of Russian Tsar Nicholas II, whose remains is not found with other members of the royal family.

Filled with hatred towards the Allies who put him into office, Romanov started the Third World War. He struck hard on all major cities of the United States and Europe. With no mercy towards the Allied army or even civilians, he destroyed everyone and everything that opposed his cause. However, the Allied commanders turned the tide of the war by destroying Nuclear missile silos in Poland and retaking the Pentagon. Romanov's final defeat came when the Allies used the Chronosphere to launch an invasion in Moscow. They overran the Soviet defenses and even Romanov's Elite Black Guard surrounding the Kremlin. Once the defenses were cleared, Tanya stormed the Kremlin to arrest Romanov. Romanov attempted to trick the Allies by forcing an aide to pose as the Premier, but Tanya was unconvinced by this ruse and found the Premier hiding under his desk, with nothing but his shirt and boxers. He was pictured in this sorry state with his American captors, and photos of him circulated across the globe, humiliating him. He was later trialed and imprisoned in the Tower of London.

Filled with hatred towards the Allies who put him into office as a puppet, Romanov started the Third World War, striking the USA immediately. His first target was the Pentagon, thus crippling the Allied military control. He continued attacking the Allies in many other locations. When the Allies were at their knees, he meant to end the war, but his advisor Yuri somehow convinced him to carry on with the war and proclaim him the leader of the Soviet armed forces.

With all opposition eliminated, Yuri made himself Premier. However, Premier Romanov had recorded a video just before his death in which he elaborated that he was not in control of his own mind during the war, and that Yuri was the one who started it. This was received at Red Army HQ and led to Operation Red Revolution, in which the leading Soviet general avenged Romanov's death by killing Yuri beneath the rubble of the Kremlin.

In the Allied campaign of Yuri's Revenge, Romanov did not have many appearances. He signed the London peace treaty with the Allies before the final joint attack on Yuri's forces. During the initial events of Command & Conquer: Red Alert 3, it is implied that Romanov fled the country (as a result of the merging timelines which left the USSR in a state of disarray after the war).

When most of the Psychic Dominators were coming online, Romanov was still in the Tower of London. He informed the Commander of the Allied Time Machine, but had to quickly end transmission, as a guard was about to unlock his cell.

The Commander went back in time, when the Soviet invasion of the Third World War was at its very beginning. Romanov was still in command, in his office, ordering the attack on Black Forest. The only difference is that he was now aware of Yuri's plans and looked eager to stop him. After the Allies surrendered to the Soviet Union, Romanov led the fight against Yuri.

However, while he was traveling by plane to Moscow, his plane was shot down above Morocco. He survived the crash unharmed, as he parachuted off the plane before it went down. Yuri's forces were ordered to search for him, but he was saved by the Commander at Rick's Place, if the Commander get there first before Yuri's forces do. If not, he will be mind-controlled by a Yuri Clone in a cell near the airport. The commander must eliminate the clone to rescue him. Upon his return to Moscow, Romanov continued leading the war against Yuri until the end.

With the last of Yuri's forces eliminated and the Allies surrendered, the Soviets were victorious at last, with no more great power to oppose them. Stock exchanges around the world began to close as cities began to cheer for their new heroic communist leaders. Using the space technology acquired from Yuri in To the Moon, the newly funded Soviet space program by Romanov began their exploration of the cosmos as communism expands across the solar system... 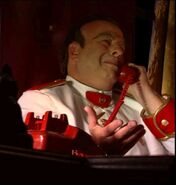 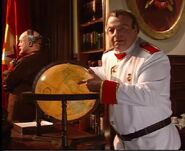 In Romanov on the Run

Retrieved from "https://cnc.fandom.com/wiki/Alexander_Romanov?oldid=233631"
Community content is available under CC-BY-SA unless otherwise noted.