The barracks were the Allied infantry training structure during the first and second iterations of the Third World War. The building was a metal prefababricated building which houses living space for soldiers, a training center and a watchtower. 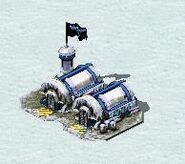 Retrieved from "https://cnc.fandom.com/wiki/Allied_barracks_(Red_Alert_2)?oldid=228184"
Community content is available under CC-BY-SA unless otherwise noted.