The Battle Lab was an improved Tech Center, allowing commanders to pursue the research and development of advanced units and structures. It could preform computer simulations allowing much better theorizing of possible technological developments involving warfare. It cost $2000 to build one and required a fair amount of power. The units that it researched and developed for were given upgrades and more parts.

It also could create a Force Field on any building, although it channelled these fields through the bases power system which would leave the base without power for a short time thus this was usually a last resort, usually only used to defend against superweapon.

A Battle Lab holds large amount of data regarding a faction's technological research. If a spy can infiltrate a Battle Lab, he or she is able to extract some of that data, giving the commander access to a new unit which utilised a fusion of both sides' technology.

A list of units acquired when a spy infiltrates an Allied Battle Lab is as follows: 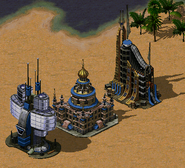 With other Battle Labs 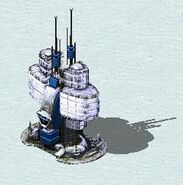 Beta icon (monochrome)
Add an image to this gallery

Retrieved from "https://cnc.fandom.com/wiki/Allied_battle_lab?oldid=226638"
Community content is available under CC-BY-SA unless otherwise noted.