The Allied construction yard was a facility from which Allied buildings and base defenses were built during the first and second iterations of the Third World War.

Opposed to the Second World War, there was a proliferation of construction yard designs leading up to the Third World War, although all continued to provide the same function for the Allies and Soviets. As in the previous war, the construction yard generally completed all components before structure assembly began at the desired site. The only major advancement was that it now possessed two separate construction queues. The main queue constructed most production buildings, refineries, and support structures, while the armoury queue handled base defenses and superweapons.

It was redesigned by the third iteration of the war, during which it could be established either on land or at water.

The Allied construction yard can build the following structures: 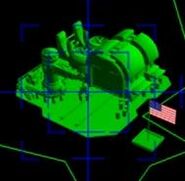 Retrieved from "https://cnc.fandom.com/wiki/Allied_construction_yard_(Red_Alert_2)?oldid=226666"
Community content is available under CC-BY-SA unless otherwise noted.