The Allied war factory was the Allied vehicle production facility during the first and second iterations of the Third World War.

This building can produce any ground and air vehicle (provided with component availability). The roof can be opened to launch any air unit completed from it. Usually, it will produce Allied-sanctioned vehicles, with limitation on tech building requirement. Each building has its own power supply, but this facility is only used as auxiliary support. Should the power be cut off, the internal supply then automatically switches its power resource to the most vital working area. This guarantees the production line, but with limited energy, smaller areas can be powered, resulting in less than desired production rates.

It was replaced by the armor facility by the third iteration of the war.

The more war factories are built the faster units can be made. The Allied war factory can produce the following: 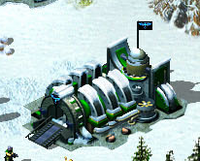 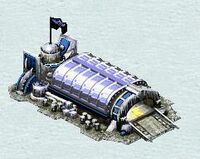 Retrieved from "https://cnc.fandom.com/wiki/Allied_war_factory_(Red_Alert_2)?oldid=228401"
Community content is available under CC-BY-SA unless otherwise noted.