The Ambulance was an unarmed variant of the American Humvee designed for a battlefield support role, used during the War against the GLA.

Medical staff can use the equipment on the Ambulance to heal nearby soldiers or occupants of the ambulance back to fighting condition. Later in the conflict, Ambulances were also able to repair nearby vehicles. Additionally, the Ambulance is immune to radiation and toxins, and could release a foam to clear them up, preventing harm to other units.

In Zero Hour, the Ambulance gained the ability to heal all nearby friendly vehicles, in addition to its infantry support role. This made them much more valued due to the vehicle, not infantry, dominance of the battlefield. If loaded into a transport unit like the Chinook or garrisoned into a Tunnel Network, it will continue to heal friendly units near its host unit. 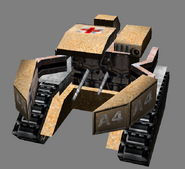 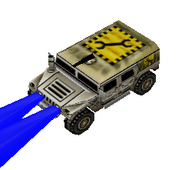 Unused Mechanic model
Add an image to this gallery
Retrieved from "https://cnc.fandom.com/wiki/Ambulance?oldid=228276"
Community content is available under CC-BY-SA unless otherwise noted.