Air fields are large complexes necessary for the United States to maintain and manufacture aircraft used during the War against the GLA.

Each airfield can support up to four fixed wing aircraft and an unlimited amount of helicopters. The American air force is really strong so the best way to not put up with the USAF is to destroy their airfields. 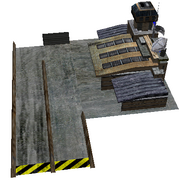 An airfield in Malcom Granger's base
Add an image to this gallery
Retrieved from "https://cnc.fandom.com/wiki/American_airfield?oldid=229671"
Community content is available under CC-BY-SA unless otherwise noted.