Anatoly is a ruthless and power hungry individual and a dedicated man to the Communist Party having a natural hatred for capitalists, America, and the Allies. He also doesn't like when people try to prove him wrong in his judgement making him very arrogant as when General Krukov tried to tell him or the Soviet Commander's flaws. It's easy for Anatoly to lose his temper when people refuse to do what he tells them. He seems to take enjoyment when people risk their lives for the Soviet Union or using them as bait. He is willing to make an alliance with the Allies in order to betray them and to mess with the Space-Time Continuum just so he can win a war. He is shown to also have a treacherous side as he was willing to frame (and kill) General Krukov just so he can stay in power. In the end it was his lust for power and arrogance that led to his death (Soviet Campaign). 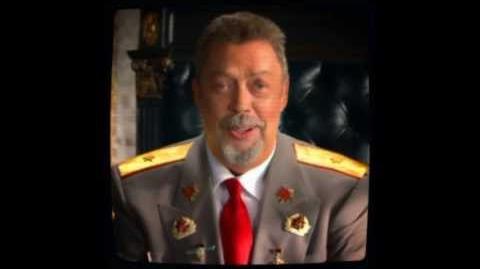