The AH-64 Apache is the primary attack helicopter of the Brotherhood of Nod in Renegade.

Nod in their past has proven to have a large network that have access to many resources in the world. One evidence of this is their acquisition of old Apache gunship helicopters. These Apaches were remains of the old World War long ago, they have been refurbished (in secret) to meet Nod's demand for attack helicopters.

Nod's version of the Apache is heavily upgraded and outfitted with the latest equipment and parts available, and with a powerful autocannon as a primary weapon. Apaches do not have sufficient armor to survive prolonged anti-aircraft fire, and thus commanders are forced to deploy them carefully. Due to their refurbishment "work in secret", access to the Apache's old missile launcher is somewhat prohibited. In return, Nod employed a free-moving autocannon turret in its undercarriage.

It is outclassed by the ORCA Assault Craft, as the ORCA sports a much potent rocket than the Apache's machinegun. By the Second Tiberium War, it was replaced by the Harpy.

In multiplayer, they also have rockets.

The Apache constantly harasses infantry (namely, the player) with its 30mm autocannon. Encounters in wide open areas with not much cover often carries more risk of death. Chain guns can be a comfortable option for those who are still amateurs on rocket launchers. Advanced weaponry such as tarantula laser chainguns or personal ion cannons is recommended if such weapon is available without liability. Tiberium based weaponry do (and only) scratch their armor as much as the Corbetti rifle. Weapons such as Flame thrower, Grenade launcher, or Tiberium sprayer are discouraged for such flimsy velocity and inaccuracy.

Flying one of these offer different challenges as they now only sport autocannons. It is considered more difficult to master than the ORCA due to their gun, limited speed, and poor quality armor. 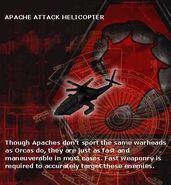 In the Renegade database

Retrieved from "https://cnc.fandom.com/wiki/Apache_(Renegade)?oldid=217563"
Community content is available under CC-BY-SA unless otherwise noted.