The biggest, most powerful ground vehicle ever constructed, the Apocalypse certainly lives up to its nickname. Each of its two main guns is more powerful than the main cannon of a lesser tank, a second set of cutting treads installed into its hull allows it to simply roll over lesser vehicles, and its magnetic harpoon secondary weapon - one of the Union's first practical magnetic weapons - can draw fast-moving vehicles straight into its "meat grinder" chain-treads, which can carve through metal much like their namesake.

However, the Apocalypse tank is not without its flaws, such as a horrendous top speed, a complete lack of anti-air and anti-infantry weapons, as well as an exorbitant price. Also, the schematics for manufacturing these vehicles are authorized only by battle lab technicians required to study the tank's performance characteristics.

Because of this tank's notoriety, the identities of apocalypse tank crews are kept secret by the Soviet Union. It is difficult to imagine what sort of person would be fit to operate such a weapon, let alone what the experience of this would do to that person.

The latest Apocalypse Tank does not have a great defense against most aircraft and infantry - the worst of which is that the Tank can be easily bribed to join the Allies for a fee of $1000. Anti-armor and anti-heavy units like Tankbusters, Javelin Soldiers, Hydrofoil's Weapon Jammers, Steel Ronin, Wave-force artilleries, Vindicators, Harbinger Gunships, Giga Fortresses, Yuriko, Spectrum Towers, and Future Tank X-1s were additional reasons why Apocalypse Tanks require support.

If they are under attack from naval units, the Apocalypse Tanks can't do much other than to run away inland- where they can't be shot at. Their M-Harpoons are effective only on ground vehicles and structures. However, for any enemy ships that are closer to the shoreline, the Apocalypse tank can utilize its special ability because non-amphibious units in the water which are reeled in by the M-Harpoons are dragged towards the shore and destroyed. 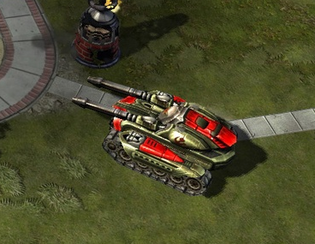 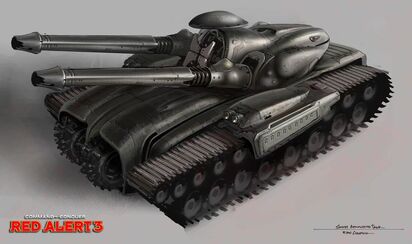 One of the design iterations 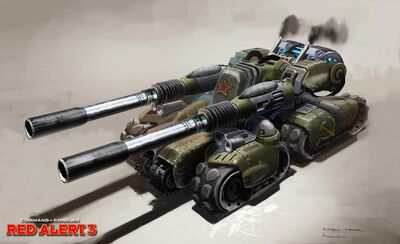 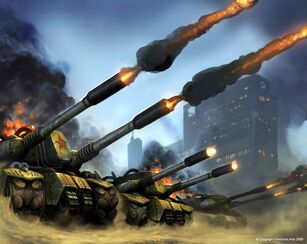 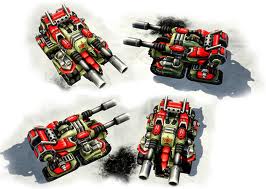 In-game model
Add an image to this gallery

Retrieved from "https://cnc.fandom.com/wiki/Apocalypse_tank_(Red_Alert_3)?oldid=231291"
Community content is available under CC-BY-SA unless otherwise noted.