The Apocalypse tank is a heavy tank that was supposed to appear in the first version of Renegade 2.

The Apocalypse tanks continues to play a role in the Soviet arsenal, even after Premier Romanov's defeat and capture. These massive tanks now have a grimier, greener appearance instead of the slick black-and-red scheme prevalent during the previous war. 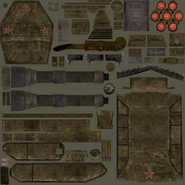 Texture file for the tank

Retrieved from "https://cnc.fandom.com/wiki/Apocalypse_tank_(Renegade_2)?oldid=226592"
Community content is available under CC-BY-SA unless otherwise noted.