Classified. Somewhere in the Middle East.

Area Fifty-Two is the fifth and final mission in the USA campaign of Command & Conquer: Generals Zero Hour. In this mission, American forces had to capture Dr. Thrax's toxin missile launchers before he could launch them against a major US city or military base.

Learning that Dr. Thrax was the de-facto leader of the GLA, the US had proceeded to cut his supplies and production. After blowing up the oil field providing Thrax's toxin production, the Americans received satellite intel of Thrax's current location and that Thrax was preparing the launch of a chemical ICBM against a major city. The US response to this was its signature "shock-and-awe campaign".﻿

Above the Earth, satellite reconnaissance had successfully located the exact location of the toxin bunkers. Six Tomahawk cruise missiles subsequently were able to strike the bunkers and wiped out all of the defending GLA forces in close proximity to them.

Whilst establishing their base of operations and defenses, the Humvees made a small patrol of the surrounding area and found a standard but well-built GLA base just over the hill of the American positions. The Humvees immediately rushed in to prevent any strikes from the GLA but, in a surprise twist, the GLA commander in the base decided to rebel and lend their arsenals to the Americans after realising that Dr. Thrax had descended into insanity, effectively defecting from the terrorist organisation.

Dr. Thrax was not swayed by this act of treason however, and immediately sent his Toxin Rebels, Scorpion Tanks and Toxin Tractors to assault the US base and the GLA defectors. The American General kept his infantry back from the fatal chemicals and let the Fire Bases and Patriot Missile Batteries do the work. The GLA defectors though needed to use their tanks and vehicles to defend their base since the crews of the Stinger Sites were vulnerable to the toxins. As the raids continued, Lieutenant Eva displayed the amount of time left before Dr. Thrax could finish fueling the rockets and launch them.

With only 30 minutes remaining to capture all four launch facilities, the Americans quickly deployed their air force to weaken Dr. Thrax's defences. The new Bunker Busters upgrade for the Stealth Fighters proved useful to the American forces since it could clear garrisoned buildings from the air without the exposing Rangers on the ground deadly toxin sprayers wielded by Thrax's Rebels. As the US and the GLA defectors built up their respective forces, the American General sent a commando team of Colonel Burton and Jarmen Kell to scout the area for enemy units and tech structures. The tech structures were captured by the US rangers and defecting rebels while the commandos located a Scud Storm each in the two Thrax bases defending the launch facilities. The US countered them with their own Scud Storm and Particle Cannon superweapons both used to destroy Thrax's Scud Storms and weaken the bases even further.

The US decided to hit Thrax's bases simultaneously: the GLA defectors would send their force to the north-east Thrax base, while the Americans would strike at Thrax's main stronghold in the north-west area.

The GLA defectors made their way to their destination where they were also assigned to capture or destroy a radar Control Bunker that was vital for the ICBM's destination. However their strike force was met with some casualties when their scouting parties were destroyed by demo traps, designed to contaminate the ground around them for a short time. Not wanting to risk any more unpleasant surprises, they brought in a Radar Van and sentry drones lent by the Americans to detect and destroy more traps. This was about the only major problem the defectors had though as their targeted base had fewer defenses. Nonetheless, the GLA defectors destroyed the base while they captured the control bunker and two of the four launching facilities.

The US forces however had a tougher time as Thrax's main stronghold was much more heavily defended. The stingers and small rockets were upgraded with toxin warheads that deal more damage to the vehicles and left behind deadly toxins on impact. Indeed, even US planes outfitted with the Countermeasure upgrade suffered much damage. These upgraded stingers additionally also shot down every Tomahawk missile launched against them before it even arrived halfway to their designated targets. The stinger crews were still no match to the Pathfinder snipers stationed inside Humvees nonetheless, allowing the Tomahawk launcher, Crusader Tank, and Paladin Tank platoons to finish the job.

Defiant to the end, even with his defenses breached, the mad GLA scientist sent everything he had against the American strike team. A massive tank battle ensured between the Crusaders and Paladins against the Scorpion and Marauder tank force inside the compound. The odds were always the Americans' favor though as the US had the firepower and technology to turn Thrax's tanks into scrap metal. With time ticking away, the Humvees carrying the Rangers rushed ahead to capture the last two launch facilities.

As the launch facilities were captured, the Americans destroyed all of Thrax's base structures. Thrax's Command Center was the last to be destroyed. His body was later found by US forces beneath the rubble. Though none is what it all seems to Dr. Thrax's death.

With the world safe once more from the threat of the GLA, the US military once more demonstrated its power by halting the threat of global terrorism. The GLA was but a shadow of itself; fragmented once again with Dr. Thrax's death, with splinter factions and warlords now fighting each other for control of the organisation. US celebrations were premature however, as they would soon learn that the GLA was far from finished with the rise of Deathstrike.

Initially, build a defensive position on your base. Then find the defectors and capture the Oil Derrick nearby and another derrick near the village.

Build a force of Quad Cannons, Paladins, Marauder Tanks, Rocket Buggies, and Humvees filled with Pathfinders and Missile Defenders. Build as many as 5 Particle Uplink Cannons and 3 SCUD Storms to soften Thrax's defenses.

Then slowly, eliminate and secure Thrax's forces. He will not activate the countdown until you enter his base. His defenders are strong, but you can overwhelm them by putting Spy Drones and Spy Sat Uplink on areas.

The fastest way to finish this mission is to use the Rebel Ambush from the GLA Command Center. First, build either the Scud Storm and/or the Particle Cannon to finish the guards near the rockets, and then deploy the Rebel Ambush. If they can't be detected, use a Spy Satellite or radar van to detect enemies along the way 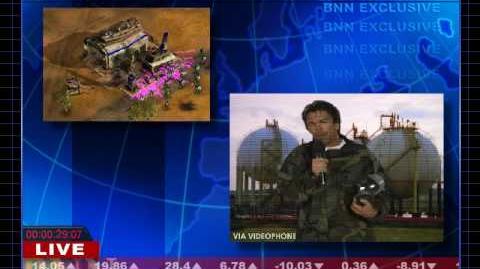