The armoured personnel carrier (or APC) was the primary troop transport vehicle used by GDI (and in small numbers by Nod) forces during the First Tiberium War. However its fast speed and medium armor and high sight radius can allow it to double as a recon vehicle.

The armour and speed of the APC also make it a viable alternative to the Humvee. The APC is equipped with the same M60 machine gun as the Humvee, can move at a comparable speed, maybe ever so slightly faster (35 speed vs 30) and is capable of taking an increased level of punishment. As such APCs are largely fielded where the battlefield situation demands greater levels of protection, but require a vehicle that fulfills a similar, if not better, light support/reconnaissance role to that of the Humvee. 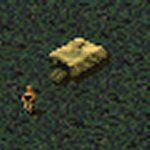 Retrieved from "https://cnc.fandom.com/wiki/Armored_personnel_carrier_(Tiberian_Dawn)?oldid=242326"
Community content is available under CC-BY-SA unless otherwise noted.