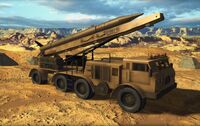 During the Second World War, the Allied used the M110. It was basically a light, tracked chassis with a single 155mm fixed turret. The whole vehicle had to turn to acquire new targets. The Allied cruiser could be seen as a naval artillery platform, as it had tremendous power and the range needed to destroy a base at extreme ranges. Soviet V2 rockets were useful for taking out Allied defenses far beyond their operational range. The extreme range of the Tesla coil, tank, and shock trooper from a certain perspective could be considered artillery.

During the First Tiberium War, surplus M110s and G6 howitzers were in service with Nod. GDI used the longer-ranged MLRS (Multiple Launch Rocket System). Fortunately for the Brotherhood, all artillery, save M270 SSMs (which were Nod exclusive anyways), were vastly outranged by the Obelisk of Light, unless the artillery was used in a tactical role.

By the Second Tiberium War, Nod advanced artillery looked like a platform for a massive cannon which was affixed at the back of the weapon. Small outrigger legs were deployed before the cannon could be fired, balancing and stabilizing it against the recoil of the massive cannon. The turret could rotate so the whole vehicle didn't have to move, but the cannon could only be fired while the artillery was deployed.

An interesting concept for an artillery platform that first appeared during the Firestorm Crisis was the Juggernaut walker, which served as three-barreled fire support for GDI. As of the Third Tiberium War, Juggernaut Mk. III units were the only mechanized walkers still in use by GDI.

In the Third Tiberium War, Nod utilized the fast, versatile beam cannon as an artillery platform. It was fragile, but could be used in a variety of ways. Beam cannons could serve as extra capacitors for Nod Obelisks, have their weapons "borrowed" by Avatar Warmechs, and bounce their lasers off of Venom patrol craft. Nod also replaced their advanced artillery with the Specter a newer design with onboard stealth systems that can bombard an area with the help of a Shadow team.

GDI continued to deploy and utilize their Juggernaut Mk. III which can bombard a spotted area with the help of a sniper team. The Behemoth was a predecessor to the Juggernaut Mk.III that included an infantry bunker.

The Scrin Devastator Warship could in some ways be considered an aerial artillery platform and a bomber.

Throughout all of the wars, most artillery platforms typically had the same problems. First, artillery is most effective against structures and infantry, and not very effective against heavily armored vehicles. This meant that unsupported artillery would be easy prey for heavy vehicles. Furthermore, most varieties of artillery are generally slow, which meant that escape was difficult if an enemy got up close. In the Third war the artillery like Juggernauts and Beam Cannons are stronger against vehicles that don't get to close.

Retrieved from "https://cnc.fandom.com/wiki/Artillery_(Tiberium)?oldid=224869"
Community content is available under CC-BY-SA unless otherwise noted.