Rage of the Black Tortoise

Assault on the Black Tortoise is the fifth mission in the Imperial campaign of Command & Conquer: Red Alert 3.

The Allied assault on Pearl Harbor was, in fact, a diversion. The real Allied objective was to sneak a landing force to Tokyo, the Allies' true target. The only thing that was in their way was a Floating Fortress dubbed the "Black Tortoise", the crowning glory of Japanese engineering. The Imperial Commander along with Naomi were sent by both Emperor Yoshiro and Prince Tatsu to the Pacific Ocean and defend that fortress from destruction.

The Japanese had the Imperial fleet supported by Rocket Angels to intercept the convoys. They also possessed the Black Tortoise, once the fleet took out an Allied squad. Naomi and the Imperial Commander were thinking this strength could hold off the attack by an Allied+Soviet alliance at the North Sea.

The Allies, however had their own navy as they made their way to invade Japan. This fleet was instead commanded by Giles Price.

An Imperial fleet, supported by Rocket Angels, was sent to intercept the Allied MCV convoy heading for Japan. Wave after wave of MCVs were disabled by the Angels and destroyed by the ships. However, this allowed the Allied forces to sent a small infiltration squad on the Black Tortoise using a Chronosphere. This squad managed to destabilize both reactor cores, and began destroying the Imperial facilities there.

The Imperial base on the Black Tortoise was under attack by Allied Riptides, Peacekeepers, and Javelin Soldiers. However, a squadron of Sky-Wings and a pair of Rocket Angels soon arrived at the fortress, and easily destroyed the Allied infiltrators, clearing the way for Imperial engineers.

The engineers managed to stabilize both of the power cores, and the Black Tortoise was finally fully operational.

Fending off the Allied assault

Seeing that their plan has failed, Allied Command resorted to a more direct approach. They quickly set up bases around the fortress, and send wave after wave of forces after the fortress power cores. However, the Wave Force Tri-Cannons were capable of decimating most attack forces before they even arrived, leaving the few troops available an easy clean-up job.

Driving off the Barbarians

After a short while, the fleet that had stopped the waves of MCV's arrived at the Black Tortoise, and they were sent to destroy the bases. The Allied base defenses were no match for the powerful Battleship fleet, and they quickly sank below the waves.

Destruction to the First Allied Base

Destruction to the Second Allied Base

The Imperial Air Force waited till the Shogun Battleships shelled the Base Defenses and the Jet Tengus used their autocannons to prevent Sky Knights from leaving Aircraft Carriers, Naginatas then finally Lead a strike force of Tsunami Tanks and Yari Mini-Subs to send the Second Base into Davy Jones locker.

Destruction to the Final Allied Base

The Last Base was the hardest to destroy as the naval battle was very huge. Naginatas proven superior to Assault Destroyers, Yari Minisubs and Tsunami Tanks swarmed the Riptide ACVs, Shogun Battleships ramming speeded the Aircraft Carriers and finally the Imperial Air Armada had swarmed the Allies best pilots into death.

Salvos of Shogun Battleship fired from Shirada Cannons to the Allied Bases and Spectrum Towers fell tower after tower and the worst part is yet to come: The Imperial Final Squadrons had decimated Giles' last base into oblivion, causing Giles to retreat.

With most, if not all, of the Allied Pacific Fleet destroyed, the Japanese now started their advance towards the US West Coast, using their Black Tortoise as a long range artillery platform and transport.

The first part is to use the Naginata cruisers, the Battleships and the new Rocket angels to destroy the MCVs that try to escape the map. If one MCV gets through the mission is a failure. Use the Rocket angels to disable the MCVs and the naginata cruisers and battleships to sink them. The Allies will use assault destroyers so get ready. After the MCVs are sunk the next part is involving using the new Sea wing unit to help the engineers to restore the black tortoise to full power. Once the Black Tortoise is restored get a powerful navy to sink Giles three naval bases but watch out for air and sea attacks. The Mission is complete once the last allied structure is destroyed. 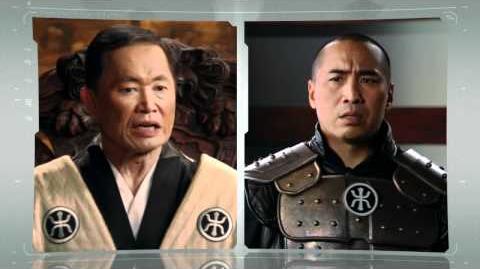