Like the regular Troop Crawler, it is a reasonably fast wheeled APC, already coming with eight Mini-Gunners on board upon rolling out of the War Factory, with stealth detection. It has firing ports for the infantrymen inside, superior armor and a small propaganda tower to heal other friendlies.

Hijackers, in particular, are useless if they try to steal these vehicles as they are not able to stay hidden, let alone get close.

The Assault Troop Crawler has better armor than the regular Troop Crawler but is still quite poorly defended against heavy weapons, especially rockets.

A comparison between the assault transport (left) and the regular crawler (right). 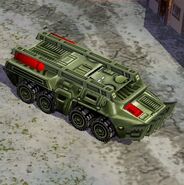 Retrieved from "https://cnc.fandom.com/wiki/Assault_troop_transport?oldid=212890"
Community content is available under CC-BY-SA unless otherwise noted.