A staple of the Brotherhood of Nod's arsenal since the First Tiberium War, the Attack Bike returns once again in Tiberian Twilight as part of the Offense Class arsenal.

While there is very little difference in terms of concept compared to its predecessors, the new Attack Bike is somewhat more survivable and packs more firepower against aircraft. Furthermore the driver is somewhat protected from enemy fire inside, something that they lacked in the Third Tiberium War.

Like its predecessors, the Attack Bike is armed with two missile pods as standard. The rockets are most effective against medium aircraft, like the GDI Orca Mk. V and are moderately effective against medium armour and infantry. When upgraded with a blue Tiberium core, the Attack Bike gains an additional missile pod, allowing it to fire a salvo of 3 rockets at a time instead of the normal 2.

Its GDI equivalent is the Talon, which is somewhat slower, but has the ability to cliffjump.

An achievement can be earned if the player uses it to destroy several targets. 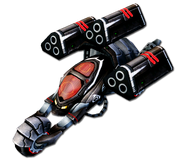 Retrieved from "https://cnc.fandom.com/wiki/Attack_bike_(Tiberian_Twilight)?oldid=224560"
Community content is available under CC-BY-SA unless otherwise noted.