Loses cannons when damaged, but receives a significant speed increase

The AW-30 Avatar, also known as the Avatar Mk. II and the Caturhasta Avatar, is a large mech used by the Brotherhood of Nod Offense Class in Tiberian Twilight.

The new Avatar continues its predecessor's role as an anti-tank walker. It can be outfitted with up to four cannons, allowing it to do monstrous amounts of damage to enemy forces. As it is damaged, the cannons are blown off from the Avatar—reducing its overall firepower, but also significantly increasing its movement speed with each cannon lost, thus allowing commanders the option to retreat the mech for repairs and, quite literally, re-arming. All Avatars require a High Leveled Nod Offense Crawler to build.[1]

The first incarnation of these assault walkers came at the hands of Marcion in the years after the Firestorm Crisis. He was responsible for the creation of the Purifier Warmech which in turn led to the development of the Avatar that saw use in the Third Tiberium War. Following its creation, data on the efficiency and progress of these fearsome war machines were uploaded and examined in real-time by Kane's artificial intelligence LEGION. The AI concluded that there were a number of serious flaws with the Mark I version of the Avatar. One of these problems was the fact that Avatar pilots often tended to destroy perfectly functioning Nod vehicles in order to boost their own firepower and capability to crush GDI forces. This means of self preservation led to a loss of battlefield efficiency and turned the adaptability of the Avatar Mk. I into a serious problem.[3]

Following this conclusion, the Nod Engineering Corps was tasked with the important mission of creating an improved Mark II version of the Avatar. This in turn lead to some important developments in this new design, the most prominent of which was the removal of a pilot control pod inside of the mech itself, effectively turning the new Avatar into an unmanned weapons platform—a design specification that puts the pilot's well-being out of the question and in turn gives the Avatar Mk. II near-unrivalled combat resilience as it will keep fighting until it is either disabled, or completely destroyed.

Meanwhile, the Mk. II Avatar pilots operated safely from inside Nod bases and were instead given an advanced remote nervous control system that allows them to be connected to their respective Avatars via a direct neural link—even from far away. This essentially turned the Avatar Mk. II into its namesake as it became a massive war machine for Nod soldiers to neurally control and act as. In addition, with the removal of the Avatar's claw—Nod engineers eliminated the capability of the war mech to "utilize" friendly vehicles to supplement their firepower.

As the Tiberium Control Network Conflict began to escalate, the Brotherhood removed some of the armor from the torso of the Avatar (since the safety of the pilot was no longer a concern) and placed an extra cannon within the chest in order to improve even further their already destructive firepower.[3]

The Mk. II Avatar is the Brotherhood of Nod's primary Tier 3 anti-medium heavy walker during the events of the Fourth Tiberium War, and a worthy equivalent and rival of the new Mk. IV Mammoth Tank. The standard Avatar freshly built from the Offense Crawler boasts a pair of ballistic cannons mounted on each of its "arms" and another, slightly more powerful cannon in the middle of its chest. Upon collecting a blue Tiberium core, it will gain an additional pair of cannon-bearing arms, bringing the total number of cannons to five. As it sustains more damage, more of these cannons will be blown off, until only the chest cannon remains. In the process, however, it gains more speed, allowing it to retreat to fight another time.

The Avatar possesses extremely tough armor, self-repairs when not in combat, leaves a husk upon being destroyed and with the backup systems upgrade: can repair itself (10 HP per second) as a husk, only to get back up once at full health. This combined with its unmanned nature makes it incredibly difficult to destroy—more difficult than even the Mastodon. As such, it has one of the highest health pools of any combat unit in the game, and is really only vulnerable to energy weapons and lasers.

Despite all these strengths, the Avatar is unable to attack aircraft—making it vulnerable to an airstrike. It also finds significant difficulty with hitting fast-moving targets, making fast attack units a viable counter.

An achievement can be earned if the player uses it to destroy 10 targets.

When idle, it seems that the avatar raises both of his arm, aim it upwards and it shows two (four when upgraded) metal rods that seems to be also seen when the avatar is firing. It also seems to mimic its firing when idle. 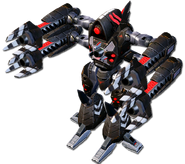 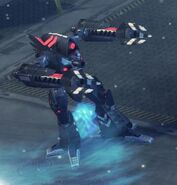 Sandstorm screen, featuring the old version of the Avatar

An Upgraded Avatar Husk
Add an image to this gallery

Due to community pressure, the Avatar was redesigned along with the Nod Engineer in the days leading up to Christmas 2009.[4]