The Avatar Mk. I is the Brotherhood of Nod's heaviest vehicle that appears in Command & Conquer 3: Tiberium Wars and its expansion pack.

It is the second mechanized walker the Brotherhood has ever utilized during the course of the Tiberium Wars, with the Purifier Warmech being its first variation.

Unlike the Purifier, the Avatar is more versatile and capable of upgrading itself to use different types of weapons or abilities such as stealth systems or sensors but must require a donor vehicle to do so.

In the wake of the destruction caused by GDI walkers to Nod armed forces during the Second Tiberium War, the Brotherhood became interested in making use of the technology - perceiving it as an innovative way to expand their forces.

Whilst GDI abandoned the widespread deployment of walkers due to reliability issues, the Brotherhood Black Hand began its own research. Basing it in part on GDI designs and taking advantage of its own research in other areas to accelerate the development of the Avatar.

After investing years of research and development at a ruthlessly fast pace, they had constructed the Purifier Warmech (built in the image of Marcion), with the powerful Avatar being its successor.

Standing at 10 meters tall, a towering bipedal warmech able to engage and crush any opposition head on with ease, was created.

The Avatar's pilot was enclosed in a "virtual sensory pod" found within the warmech itself.[1] The pod is a control interface wherein the pilot is neurally linked to their mech, allowing them to control its movements. The Avatar's incredible all terrain ability, fluid motion and extreme power make it in effect a gigantic soldier.

The introduction of this towering walker changed Nod's military doctrine - instead of always resorting to using hit-and-run and guerilla tactics to wear down their heavier adversaries, the Avatar gave Nod the option to battle their opponents head to head with superior armor and terrifying firepower if the need arose.

It comes by default with a powerful laser cannon on its right arm (based on the Isis laser found on the Obelisk of Light ), and possesses the ability to use its claw on the left arm to rip off weaponry and equipment from certain other Nod vehicles, then install the components onto its own frame, augmenting its battle capabilities:

In addition, the Avatar Warmech is capable of crushing most other vehicles under its feet, similar to the Mammoth 27 or Annihilator Tripod. In form, it bears similarity to CABAL's Core Defender, although it is unclear if Nod reverse-engineered its technology.

An Avatar can also upgrade itself using enemy Nod vehicles, gaining power while destroying an enemy unit. They can also rip weapons of other Nod sub-faction vehicles (e.g. A Marked of Kane Avatar can take the Flamethrower off a Black Hand Flame Tank).

As the Avatar is a successor to the Purifier, both walkers bear a high level of visual similarity. However, there are noticeable differences that can be used to distinguish the two.

Generally, Avatars are predominantly black in color except for red lights and stripes along the body and a silvery gray middle torso and legs, while Purifiers possess red-mauve armor on the shoulder and leg sections, with yellow and black warning lines on these segments.

Sometime after 2052, the Nod AI LEGION conducted a critical analysis of the warmech.

It found that while in itself a powerful unit, Avatar pilots would impulsively take the weapons off of other perfectly functioning Nod vehicles in order to maintain self-preservation - which lessens overall Nod presence in the area and consequently gives opposing GDI forces the upper hand.

The AI found that this created inefficiency, and so issued Nod engineers to later work in developing the next-generation Avatar. The Mk. II version was made available by the time of the Ascension Conflict.

The primary weakness of the Avatar is its susceptibility to aerial assaults, swarms of anti-armor infantry and Commandos, who are capable of planting explosives on an Avatar's legs (a major reason GDI decided to abandon most of its walker research and technology).

Although powerful, Avatars are only capable of using their laser weaponry whilst stationary: a drawback against highly mobile targets. However, a simple flamethrower upgrade (which may be used while moving) can partially eliminate the drawback of being bombed by Commandos or anti-armor infantry. Another failing is that without any additional weapons, the Avatar often loses against the GDI Mammoth Tank.

Fallen Avatars are repairable by capable engineers, who can reactivate the pilot's virtual sensory pod and rebuild the walker, adding it to the armed forces of the side the engineer was on (a blessing and a curse for the Nod commander). The only requirement is that the engineer must reach the fallen walker before either its power core finally dies down, or a coup de grace is delivered, destroying the fragile husk.

In earlier patches, the Avatar was regarded as the least useful tier 3 land unit. Lacking the Mammoth Tank's firepower and the Tripod's range and shield upgrades, and its own ability to tank equipment from vehicles was typically regarded by most players as too expensive to be worth using, particulary since in practice the Avatar is too slow to take advantage of stealth detection or being stealthed, and Vertigo bombers proved a more cost effective way of dealing with enemy armor. However, in later patches, the Avatar was balanced. Specifically, its cost was reduced (to 2200), its health increased, and its original laser weapon made more powerful. Due to this, the Avatar is currently considered to be both cost effective and powerful.

A bit of a battlefield tip: properly timing multiple Avatars can allow them to share a single vehicle.

Interestingly, an Avatar can upgrade itself using weapons from enemy Nod vehicles, although this tactic is mainly effective against enemy Flame Tanks, being the slowest of the four Avatar-compatible units. Additionally, if a vehicle targeted for weapon commandeering is destroyed, an Avatar can still retrieve the weapon from the remains of the vehicle (it only has a few seconds to do this, however, before the wreckage disappears). 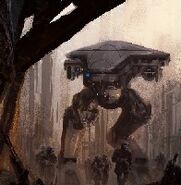 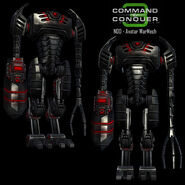 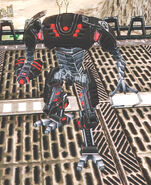 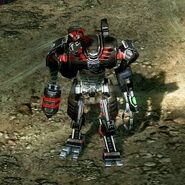 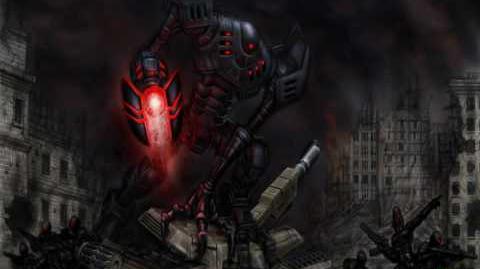 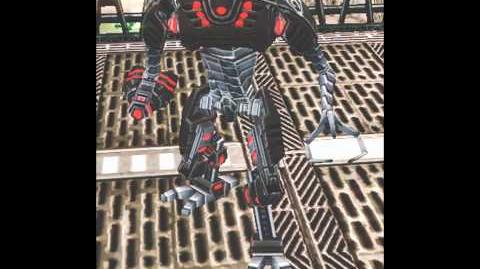 Retrieved from "https://cnc.fandom.com/wiki/Avatar_(Tiberium_Wars)?oldid=231062"
Community content is available under CC-BY-SA unless otherwise noted.