Those Imperial Commanders of World War III with enough clearance from HQ can release via the Top Secret Protocols the devastating Balloon Bombs.

These balloons have long irritated Allied commanders who looked up expecting paratrooper reinforcements but seeing them instead. The balloons rained down from the skies, carrying large hi-explosive bombs, which they dropped onto the targeted area once they descended close to the ground. Imperial commanders can also manually control the bombs.

Once they reached the ground, these bombs can cause considerable destruction. However, the balloons drop quite slowly but can be dealt with anti-air weaponry, only to cause a faster descent.

The standard Balloon Bombs attack consisted of five balloons. With additional clearance however a commander can choose to upgrade it. 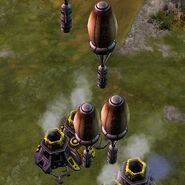 A group of Balloon Bombs

Cursor symbol
Add an image to this gallery

Balloon Bombs in Red Alert 3 are very similar to a real-life Japanese experimental weapon. Fire Balloons or Balloon Bombs (Japanese: 風船爆弾 fūsen bakudan) were used in OTL by Imperial Japan in World War II. They were designed to be carried across the Pacific Ocean via the Jet Stream high in the atmosphere, and cause havoc on the West Coast of North America. More information can be found here.

Retrieved from "https://cnc.fandom.com/wiki/Balloon_Bombs?oldid=211269"
Community content is available under CC-BY-SA unless otherwise noted.