The Banshee was an advanced Nod fighter-bomber craft used during the Second Tiberium War and the Firestorm Crisis, derived from Scrin technology uncovered from the artifact known as the Tacitus.

Kane began to make use of technology plundered from the alien artifact known as the Tacitus in order to create powerful new weapons for the Brotherhood. One of the developments from the device was a technology in which he used to create this next generation heavy fighter-bomber attack aircraft.

Nod established a cloaked base at Sector Seven (somewhere in the Balkans) which served as the primary production facility for the advanced Banshee fighter-bombers. After the existence of the Banshee was discovered, General James Solomon dispatched Commander Michael McNeil to destroy the base, where he was assisted by the Forgotten. The Forgotten were able to determine the location of the hidden Nod base, enabling GDI to destroy the Banshee factories in the hopes of eliminating all the prototypes.

While the prototypes were indeed destroyed, Nod was not discouraged from rebuilding replacement Banshees, and utilizing them on the battlefield even towards the final stages of the war.

As the Second Tiberium War raged on, GDI began testing their new prototype Mammoth Mk. II superheavy walkers. Kane sought to destroy them as they were a threat to continued Nod operations, and thus gave Anton Slavik a squadron of Banshee fighter-bombers from his elite guard - which were used to great effect in destroying the Mammoth-walker prototype.

During the Firestorm Crisis, the Nod cybernetic intelligence known as CABAL rebelled against the Brotherhood in an attempt to dominate the Earth. During this time, it made use of Nod Banshees as a means of attacking GDI and Nod structures before its defeat.

The Banshee was retired from service following the Firestorm Crisis as the Brotherhood had developed the Vertigo: an advanced dedicated stealth bomber craft - which fulfilled many of the heavy air-to-surface anti-armor duties of the Banshee.

Once the Scrin arrived on Earth however, a striking resemblance could be noted with both the armament, performance and design of their own strike craft: the Stormriders—and the old Banshees. It was later confirmed that the Banshee's design was derived from the Tacitus, explaining the similarities between the two.

The Banshee is a thin, compact and very heavily armoured craft. It is outfitted with powerful rapid fire plasma cannons—also developed using knowledge gleaned from the Tacitus. The plasma cannons have to be recharged at a helipad, however, so the Banshee is incapable of independent long-term operation.

Its weapons are optimized for use against vehicles - especially lighter vehicles, although there is evidence to suggest that even a small group of them can destroy even a Mammoth Mk. II. Although very effective against armoured mechanized units, its plasma cannons are slightly less effective against structures. Despite this, the rogue artificial intelligence known as CABAL made use of Banshees as weapons to target GDI and Nod structures during the Firestorm Crisis.

Banshees are seen as lethal air-superiority fighter-bombers in cutscenes, but serve as the Nod equivalent of Orca Bombers in-game. Compared with the Orca Bomber, the Banshee's plasma cannons are much more accurate, though small-sized, fast moving targets still have a chance to dodge their projectiles. Although it has no anti-air capabilities in-game (the only airborne unit with air-to-air capability in Tiberian Sun and the Firestorm Expansion was the GDI jump jet infantry), the Banshee was nonetheless ideal for dealing with ground vehicles, and still quite suitable when used against structures.

After three attack runs, the Banshee must return to a helipad to recharge its plasma cannons. 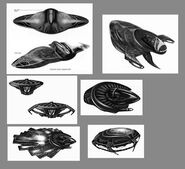 Retrieved from "https://cnc.fandom.com/wiki/Banshee?oldid=231417"
Community content is available under CC-BY-SA unless otherwise noted.