The Barracks is a GDI structure designed to provide living quarters for soldiers, as well as store their equipment. Generally simple, they are designed to hold large numbers of soldiers comfortably, with most of their facilities located underground. This generation of Barracks was designed immediately after the Firestorm Crisis and was first seen in 2034.

GDI base camps are created using highly portable, modular buildings. This allows for easy construction and tear-down of shelters in harsh climates and remote locations. Personnel stationed at GDI bases will find themselves protected from Tiberium contamination and ion storms due to their durable armour plating, but will not have access to advanced weaponry without the support of an Armory. 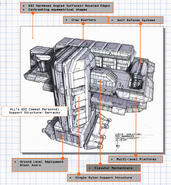 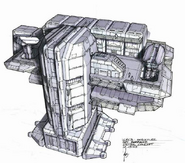 Ditto, without the annotations

Intelligence database image
Add an image to this gallery

Each Barracks have a walkway, where a Sergeant patrols. Although armed, he does not fire on enemies. He reuses the model originally made for an early "Blue Zone" version of the Commando. If the Barracks is heavily damaged, the walkway will be damaged and the Sergeant patrolling will disappear in thin air.

It heavily resembles the Instant Dojo used by the Empire of the Rising Sun in Red Alert 3, while the patrolling rifleman resembles patrolling Peacekeeper on the Allied Boot Camp.

Retrieved from "https://cnc.fandom.com/wiki/Barracks_(Tiberium_Wars)?oldid=218713"
Community content is available under CC-BY-SA unless otherwise noted.