The Battle Fortress was an armored troop transport developed by the Allies during the Psychic Dominator Disaster.

Essentially a much heavier version of the M113 APC, the Battle Fortress was a heavily armored mobile bunker with a machine gun and firing ports for up to five infantry. It was tied with the Kirov Airship for the strongest armor of any unit. The Battle Fortress was so large and heavy that it could easily crush walls and most other vehicles simply by driving over them, including the mighty Apocalypse Tanks. However, due to the Battle Fortress's slow speed, this ability was impractical against a competent enemy commander.

Many commanders opted to garrison a Battle Fortress with purely Chrono Legionnaires, as this allowed the Legionnaires more protection while also granting the ability to fire while moving. Mixing in other infantry along with the Legionnaires was not effective, as targets being phased out by Legionnaires were invulnerable to attack by other units.

In addition, the Battle Fortress was slow and could eventually fall to long range bombardment from the Soviet Siege Chopper. It was also vulnerable to being "lifted" by the Magnetron into water or into mind-control range. Furthermore, Apocalypse Tanks and Tank Destroyers possessed enough firepower to make short work of the Fortress if they were not crushed (though a Battle Fortress with Guardian GIs or Chrono Legionnaries loaded would defeat both with ease). They were also exceptionally vulnerable to massed tanks, even if garrisoned with the proper infantry.

The Battle Fortress was phased out or erased after the Soviets meddled with the space time continuum. This, however, paved the way for the Assault Destroyer. 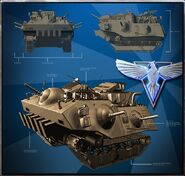 Retrieved from "https://cnc.fandom.com/wiki/Battle_Fortress?oldid=245485"
Community content is available under CC-BY-SA unless otherwise noted.