The Battle bus is a Global Liberation Army vehicle unit exclusive to General Junkyard that is expected to appear in Generals 2. Like its predecessor during the later stages of the First GLA War, this large infantry transport can turn into a bunker when destroyed by the enemy. It can also deploy into a bunker when ordered to, like the Nod Reckoner. 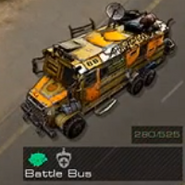 Abilities
Add an image to this gallery
Retrieved from "https://cnc.fandom.com/wiki/Battle_bus_(Generals_2)?oldid=169824"
Community content is available under CC-BY-SA unless otherwise noted.