The Beam Cannon was the Brotherhood of Nod's advanced energy-based artillery platform during the Third Tiberium War.

The Beam Cannon was a powerful particle beam emitter mounted on a versatile six-wheel chassis, giving the vehicle a high degree of mobility. As a long-range artillery vehicle, the Beam Cannon sacrificed heavy armor in favor of mobility and cost-effectiveness, so commanders would need to position it behind their own lines.

The Beam Cannon was highly effective against vehicles and structures, especially when in groups, as well as being reasonably effective against infantry. The Beam Cannon had four unique properties. Firstly, it could be used to supercharge Obelisks of Light, increasing their rate of fire, attack range, and vision range (up to maximum of four Beam Cannons per Obelisk). Secondly, the Beam Cannon could extend their effective range by reflecting its laser beam off mirrors which were mounted on the underside of Venom Patrol Craft. Thirdly, the Beam Cannon's weapon could be commandeered by Nod Avatars in order to act as a secondary laser. Fourthly, multiple Beam Cannons firing at the same target could combine their beams in order to produce a single beam with firepower greater than the sum of its parts. This powerful beam was especially strong against heavily armored structures and vehicles, such as Mammoth Tanks.

Compared to the Specter artillery with which the Beam Cannon shared a similar battlefield role, the Beam Cannon offered higher firepower for less cost and required less advanced technology. The Beam Cannon was also more effective against moving targets, since it fired a laser beam directly at its target instead of using artillery shells which take time to hit their targets. Their versatility also come at the fact that they reinforce the Obelisk killing power. However, the Beam Cannon lacks the Specter's stealth ability and splash damage. Moreover, the beam cannon would be at a full disadvantage on dealing with a complete set of fortification top hill; they require a fragile-to-antiaircraft-defence Venom to shoot.

Beam Cannons close together will combine their beams into one powerful beam that is more powerful than if they were firing individually. The formula for mass Beam Cannon damage per second is 150 � n^2, where n is the number of Beam Cannons merging their beams together.

The Beam Cannon was not seen in the Ascension Conflict, although its design elements may have been used in the new AT-20 Scorpion tank. 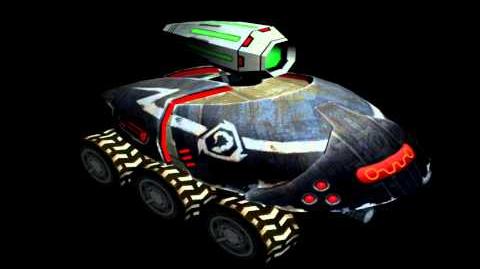