The Black Hand is an organization within the Brotherhood of Nod formed with the blessing of Kane. It was originally founded as a covert unit that enforced the teachings of the Brotherhood's charismatic leader and was responsible for the Brotherhood's wet work. The cult has since grown to become a powerful and influential religious group that, until recently, had operated mostly in secret. Though Kane has remarked that the Black Hand existed since "time immemorial" and had been among the first to follow him, the organization was only confirmed to exist in the First Tiberium War, however, many of Nod's senior members make reference to "The most loyal of Kane's followers" having existed for millennia.

During the First Tiberium War, the Black Hand was founded as the personal guard of Kane by General Raveshaw. Built from the ground up as the most elite combat force in the Brotherhood, absolutely loyal to Kane, it soon became more than just a guard - they were deployed as special forces whenever the situation called for it.

The organization also served as a type of religious police within the Brotherhood, as the Black Hand were considered part-elite force and part-priesthood. Despite the rigid lifestyle and harsh discipline, many Nod soldiers wanted to join the organization as it was viewed as a form of prestige.

Its members were hand picked by General Gideon Raveshaw. Before being accepted into its ranks, initiates were indoctrinated thoroughly with Nod's pseudo-religious teachings, and those that succeeded, became zealots placing unfaltering faith in Nod and Kane. Once the process was completed, the Black Hand initiates were further trained in the arts of war and once they became fully fledged members, they were granted access to the best equipment and body armor available, with the most notable being the Ezekiel's Cape stealth suit and experimental portable Obelisk of Light modules, codenamed Firefly and Tarantula respectively. While many brothers are eager to join, the final decision is left to the current Black Hand commander. When accepted, the members undergo extreme indoctrination, resulting in nothing less than a lethal zealot, completely devoted to the Brotherhood.

The Global Defense Initiative was at first oblivious to the unit's existence. However, disquieting rumours begin to rise when intercepted communications indicated that Far East Nod formations were communicating with an unknown Nod unit - the Black Hand. While most of the messages were still encrypted, GDI cryptologists managed to decipher enough to understand that operation "Silver Saber" was a success (possibly referring to the plan to capture GDI's top Tiberium specialists) and that the noose is tightening in Eastern Europe as planned.[1] (Note: due to the similarities to the real life black hand, this may be a reference to the assasination of Archduke Franz Ferdinand, which started the First World War -the last real-life event in C&C canon.)

General Adam Locke dispatched Nick Parker to track the scientists. The commando encountered and killed many of the Black Hand and eventually killed Gideon Raveshaw, the first commander of the formation.

Prior to the last battle of the war, General Mark Sheppard debriefed the then commander James Solomon on Kane's main Temple, protected by Kane's "own crack militia". While there is no direct evidence, the "militia" protecting Kane is likely to the Black Hand.

The Black Hand had a radically different modus operandi from other Nod forces, as they cared little for civilian casualties - their deployments showed a 72% higher civilian casualty rate[1] than that of mainstream Nod, which tended to avoid civilian casualties. Other activities included sabotage, assassinations, kidnappings, and terrorism.

The Black Hand was also responsible for safeguarding the Project ReGenesis as well as capturing important GDI personnel, such as Dr. Ignatio Mobius, Dr. Sydney Mobius and Dr. Elena Petrova.

It is unknown who became the commander of the Black Hand following the death of General Raveshaw at the hands of captain Nick Parker, but it is known that at the time of the Second Tiberium War the unit was commanded by Commander Anton Slavik.

Slavik commanded a substantial force of these men, which allowed them to become a significant player in the struggle for power prior to the Second Tiberium War and allowed the rebirth of the Brotherhood, stronger and more resilient than before. Members of the Black Hand served as officers, advisors and commanders and following the destruction of Kane's Pyramid at the last moment by Commander Michael McNeil and the rebellion of CABAL were called upon to fight for Nod in the field, as their elite cadre status made them formidable soldiers.

By this time, the Black Hand had expanded its jurisdiction to become the wardens of the Brotherhood's religion. Along with spreading the prophesies of Kane, they were also preserved the spiritual discipline of Nod, even by the use of force.

Following the Firestorm Conflict, internal strife began to rise, even within the Black Hand, as Slavik's prominence as a general drew unwanted attention to his status as a Black Hand prelate, as well as the organization itself. Many began to believe that Slavik was a traitor to the cult. Tension grew between the Slavik loyalists and anti-Slavik groups, led by Brother Marcion.

Following the assassination of Slavik by Marcion, the Black Hand separated from the Brotherhood and became a splinter faction. The bulk of the cult's followers went into exile in Australia. Soon afterward, Nod shattered into various subfactions.

It is at this period that Marcion began radical changes to the Black Hand, trying to reflect himself as a "pure" religious figure. The Black Hand became a fanatical religious cult with a lot of military potential, both far and close to the original covert unit. Where Kane was maintaining a myth, Marcion was creating a well organized, devoted religion.[2]

Despite his claims that Kane was a pretender, Marcion was brought back into the fold by Kane. With Marcion's change of heart, the Black Hand rejoined the Brotherhood. 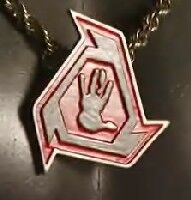 After the internal conflicts were rectified, the Black Hand formed the core of the Brotherhood revival efforts, gathering support for them in the Yellow zones and procuring supplies and technology. They played a crucial role and soon their ranks expanded, to the point of them becoming elite infantry formations of the Brotherhood.

Black Hand infantry operate as shock troops, while supported by the numerous militia. Currently, the Black Hand wear full powered armor, fireproof cloaks masking their thermal signatures, and helmets with three horizontal visors. This equipment allows them to use their advanced flamethrowers effectively without harming their health as well as effectively clear out garrisoned buildings and decimate infantry. The Black Hand Chameleons were retired from service, the task of infiltration and sabotage granted to the elite Shadow Teams, who operated independently of the Black Hand. They also refuse to use stealth units as the Black Hand wishes to leave behind a visible example to any surviving witnesses to those who oppose Nod.

Along with its infantry formations serving in the regular Nod forces, the Black Hand's influence allows the organization to maintain its own military branch, essentially being a distinct subfaction of Nod. Instead of poorly trained Militias, its main infantry consists of elite Confessor Cabals, introduced after Marcion's ascension to the position as the Black Hand's leader. Commandos are available to a greater extent to Black Hand Commanders, allowing two battle-hardened battle sisters to be allocated to their forces-at the cost of their cloaking abilities. Also available is the Purifier, a predecessor to the Avatar Warmech; lacking it's more advanced counterpart's ability to commandeer technology, but with flamethrowers and subliminal projectors already installed. This unit is a pure example of the Black Hand's combat doctrine-headlong and ruthless. Replacing the stealth tank, the Black Hand developed the Mantis drone for defense against airborne threats, despite the organization's heavy objection to robotics.

The Black Hand does not use aircraft, except for Armageddon bombers used in support powers.

The cult survived into the latter half on the 21st century. Under Gideon, it has become more and more radical, up to the point where it broke off from the Brotherhood proper (again) and rose up against Kane under the brother's name. However, some of its members stayed with the Nod loyalists and fought for Kane. It is presumed that the Black Hand as a cult was brought back into the Brotherhood of Nod when Gideon was captured near the end of the conflict.

The Black Hand still used flamethrowers, which are effective against structures. The troopers explode into fireballs when killed.[3]

Despite their history of using Chameleons, under Marcion's regime, Black Hand forces currently shun the use of stealth and robotics, preferring to overwhelm the enemy head on. Interestingly, they still use the Mantis support droid for anti-air operations. Additionally, the Black Hand lacks air units, engaging enemies solely on the ground, though they are willing to call in airstrikes via Armageddon bombers.

Their Purifying Flame is so powerful it can prevent Commandos from going near Purifiers and bombing their legs and can even melt Mammoth 27s.

After being brought back to Nod's path, the Black Hand first aided in destroying GDI's Liquid Tiberium research facility, sacrificing all the troops assaulting the lab in the process. During the Third Tiberium War, the Black Hand were then sent to secretly kidnap GDI's top tiberium scientist, Alphonse Giraud. In the aftermath of the war, the 2nd Armoured Regiment of the Black Hand aided the Marked of Kane to help retrieve the Tacitus, despite their oath of never using soulless machines.

An organization named the Black Hand existed in real life as a secret society in Serbia. It formed around a goal to assassinate Aleksandar Obrenović, the last Serbian king of the Obrenović dynasty. They succeeded and the Karađorđević family replaced them. The Black Hand continued to work and exist on its own, and influenced its puppet organization called the "Bosnian Youth", which led to the assassination of archduke Franz Ferdinand in Sarajevo by the Bosnian Youth agent Gavrilo Princip on 28 June 1914.

Given the importance of Bosnia and Herzegovina to Nod and Anton Slavik's ancestry, the Black Hand in the Command and Conquer series may in fact be the extenstion of the real-life Black Hand.