Blackout is a side mission in the Nod campaign of Tiberian Sun.[1]

Taking out this weak position of GDI forces will allow us to reclaim our Sarajevo temple without interruption. Move in under the cover of an ion storm - while GDI's communications will be down. Take out the Radar Facility before the storm abates.

When Anton Slavik usurped Hassan and reunited the Brotherhood under his banner, Kane suddenly announced his return to his loyal followers, to their great surprise and joy.

As had been planned beforehand Hassan was publicly executed by having his throat cut and Slavik became Kane's right-hand man. Kane immediately tasked Slavik with taking back the old Temple of Nod in Sarajevo from GDI and since GDI did not yet realise Kane wished Nod to return to Sarajevo, Nod had the element of surprise.

But in order to get to Sarajevo they would have to travel through the GDI Military Zone centred on Greece. This would not really be a problem, the zone was relatively lightly defended but the Radar station in Macedonia, Greece near Thessaloniki would alert GDI to Nod's movements and so lose them the element of surprise in their attack on Sarajevo; unless that is it was eliminated first of course.

CABAL initially misinformed Anton Slavik by claiming that the base within which the Radar station was located was a weak GDI position. In fact it was for this early period of the Second Tiberium War a very well fortified and defended base and Nod had yet to introduce their powerful new Nod Artillery into their arsenal.

The base was made of two parts, the relatively lightly defended front base and the heavily defended rear base in which the Radar Tower was located, which was even defended by the powerful RPG Upgrades.

The Nod plan was to coincide their attack with the predicted outbreak of an Ion Storm in the region, this would prevent the Radar station from functioning well enough to warn the base and also prevent the GDI from flying in a force of reinforcements once they realised its sudden strategic importance.

Upon landing Nod forces encountered a patrol of Hover MLRS. Fortunately for Nod they were grounded by the sudden outbreak of the predicted ion storm before they could escape and alert the base and were so easily overwhelmed.

After destroying the patrol Nod established and built up a base, eventually managing to assemble sufficient reinforcements to break through the powerful defenses of the rear base and somehow eliminate the Radar station from operation. Crucially they were able to do this before the ion storm had abated alerting GDI to Nod movements in the wider area and allowing them to land in reinforcements by air.

But despite their inability to land reinforcements by air there were still plenty of GDI supporters within the region to reinforce the base's manpower so that Nod's victory was likely neither achieved easily nor at a low cost in lives. 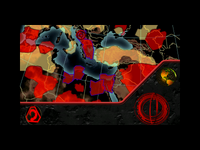 ﻿With the radar facility now down, Nod forces could move in closer to Sarajevo without being detected prematurely and would thus would have the advantage of surprise against the GDI base there.

At the same time the costs of defending the base had drained the meager GDI forces in the wider region and the destruction of the Radar station had left them blind. Consequently as the first wave of Nod forces advanced towards Sarajevo, a second wave of Nod were easily able to overrun the GDI military zone centred on Greece.

In this manner Nod acquired control of Greece as well as Albania, Macedonia, and Bulgaria while contesting control of Serbia with the GDI; these were all countries which had been at the core of the Nod holdings in Europe during the First Tiberium War and had been occupied by the GDI at the war's conclusion.