The Boomer attack sub was Yuri's only combatant naval unit during the second iteration of the Third World War. It was essentially a combination of the Soviet Typhoon attack submarine and dreadnought designs and heavily resembles the old Missile Submarine. Boomers were especially prevalent around Yuri's essential installations, such as his main cloning facility in Australia, and his secret island space facility.

Yuri's Boomer was capable of firing two torpedoes at once, as well as launching ballistic missiles onto shore installations when surfaced. This, along with increased heavy armour, made it more versatile and powerful than the Soviet Typhoon submarine. An elite Boomer could fire four torpedoes and its SLBM became considerably more powerful. Due to their design, giant squid were unable to attack Boomers. However, the Boomer was rather slow and did not utilize as powerful missiles as Soviet dreadnoughts did. It was also completely helpless against aircraft, making it particularly vulnerable to Allied Ospreys, as Yuri's navy did not consist of any anti-air vessels.

The main Boomer assembly line was on a secret island in the Pacific ocean, which was destroyed by an unnamed Soviet commander.

The Boomer can easily sink any other ship in a one-on-one duel, but the destroyer and Typhoon cost half as much, and the Typhoon can cost 3/8 of the normal price with an Industrial Plant. However the boomer is significantly more heavily armoured and can take a beating. What is key that this submarine is available without the need of deploying a tech lab.

When the Boomer surfaces to fire its missiles, it is incapable of defending itself, leaving it vulnerable to conventional attacks. Anti-aircraft weapons can destroy its missiles, protecting anything targeted by the Boomer. All ships equipped with sonar, such as the destroyer, can detect it and then attack it and relay its position to other units and buildings. As with other naval vessels, it is vulnerable to Navy SEALs, provided that the infantry is not killed before planting the charges. The SLBM launchers require more time to prepare and launch, but the missile itself is more durable than a dreadnought's missile or an aircraft carrier's Hornet. 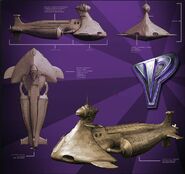 Icon with Chinese text
Add an image to this gallery
Retrieved from "https://cnc.fandom.com/wiki/Boomer?oldid=241200"
Community content is available under CC-BY-SA unless otherwise noted.