The history of the Bulldog is unknown at this time, other than that it is a GDI jeep (akin to the Humvee or the Pitbull) that is armed with a high-powered shotgun that, surprisingly, can even hit aircraft such as the Nod Venom.

Despite wielding a top-mounted shotgun, it can target aircraft and do so effectively, especially groups of light aircraft. It deals gun damage, and thus is effective against light armor such as Nod cyborgs in particular. However, it shares traits with earlier Nod vehicles such as light armor, and thus cannot withstand concentrated fire from similar sources as its own Shotgun. The shotgun can hit multiple enemies that are close together.

It features a good detection range for burrowed or stealthed units, and is also the fastest GDI unit. 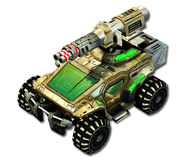 Render
Add an image to this gallery
Retrieved from "https://cnc.fandom.com/wiki/Bulldog?oldid=237637"
Community content is available under CC-BY-SA unless otherwise noted.