Colonel Burton was a highly experienced Combatant expert in covert operations and an American hero, who participated in numerous campaigns against the GLA.

An expert in covert operations, Colonel Burton can wreak havoc against enemy infantry of all types. Armed with a rifle, knife and remote or timed demo charges, Colonel Burton’s stealth training allows him to move invisibly across almost any terrain.[1]

A master of stealth and of destruction, Burton was practically a one-man army. He was so powerful that he was even able to take on tanks and destroy buildings with C4 alarmingly quickly. When he achieves heroic status, he can tear through buildings in less than a minute with his machine gun. Garrisoned in a building, he could easily hold off entire waves of infantry and lighter vehicles with ease provided a garrison-clearing unit doesn't come along.

His stealthy knife attack made it very useful for him to eliminate infantry while staying hidden, let it be entire regiments or a lone soldier. There were no AI warnings of infantry killed by Burton, allowing him to easily slaughter infantrymen without the enemy knowing it.

Using his knife, Burton can be used to clear enemy infantry positions or particularly dangerous or irritating infantry targets to clear the way for armor columns or air attacks. His rifle is extremely dangerous, and can melt away most light tanks or vehicles.

He is however still an infantrymen, and has standard weaknesses against anti infantry weaponry, though a significant amount of health in comparison.

However, Burton is just a man. Anti-infantry Tanks armed with Gattling Guns represented a serious threat, provided the enemy commander was able to detect him. Burton's demolition charges could be disarmed by workers or construction dozers.

His explosives also took some time to plant, meaning he was completely defenseless in the process. Heavier vehicles can easily resist his assault rifle but still run a risk of being destroyed if they lack proper anti-infantry weapons. Chinese land mines and GLA Demo traps can also deter him from planting C4's as he'll be injured or even incapacitated before reaching the building.

A valuable asset to the Americans, Burton was employed in many of its campaigns against the GLA. He assisted an American commander in several missions against the GLA, such as the rescue of three US pilots from the enemy's clutches in Yemen, defeating both the GLA and a rogue Chinese military commander in S-E Kazakhstan and helped in the assault on the last GLA stronghold in Akmola.

In Zero Hour, Burton helped destroy the GLA presence at the Somalian docks assisted by the US Navy fleet and teamed up with Black Lotus to destroy a GLA secret research facility at Mount Elbrus in Russia. In Iran, he also helped the American task forces to destroy the GLA's fundings by capturing the oil fields.

What remains of his fate by the end of the war remains unknown to this day.

According to Zero Hour's sound files, General Townes was to have his own version of Colonel Burton called Laser Burton. He was supposed to be equipped with a laser-powered variant of the OICW. It was dropped for some reason, however mods (like Shockwave) restore the Laser Burton.

German icon
Add an image to this gallery 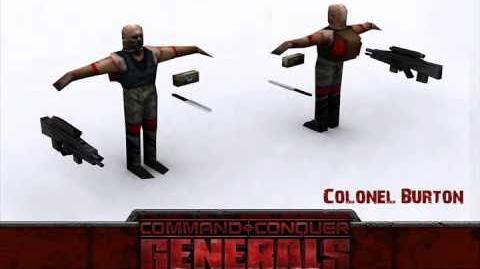 Retrieved from "https://cnc.fandom.com/wiki/Burton?oldid=230647"
Community content is available under CC-BY-SA unless otherwise noted.