The Buzzer Hive is a Scrin anti-infantry structure. It releases swarms of Buzzers when approached by hostile ground units. The swarms will move towards the enemy units and attack them. They can be destroyed by enemy fire; the hive will immediately release additional swarms to replace any losses, up to a maximum of three independent swarms at any one time. When idle, the buzzers circle around the hive.

Buzzers released by the hive cannot be controlled by the player. The hive replaces its swarms at no cost. The hive can be built behind other units with the buzzers simply going around and attacking whatever comes within range. This will force units to have to go around whatever it is blocking their line of sight (unless facing walkers such as Titans or Avatars, since they can simply fire over buildings). The Buzzer Hive is the only base defense which actually produces a unit to defend itself, rather than using a projectile, which means it can be intercepted, but it's the most lethal anti-infantry base defense of the War. 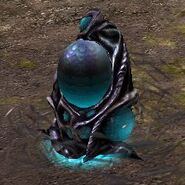 Closeup
Add an image to this gallery

Retrieved from "https://cnc.fandom.com/wiki/Buzzer_Hive?oldid=223469"
Community content is available under CC-BY-SA unless otherwise noted.