The C-130 Hercules is a cargo plane used by GDI and Nod during the First Tiberium War.

The plane is a four-engine turboprop cargo aircraft. It is capable of short takeoffs and landings on unprepared runways, a capacity the Brotherhood of Nod uses to deliver its vehicles to its airstrips worldwide.

GDI use the Hercules for delivery of ordnance and deployment of paratroopers among other things.

The Hercules delivers vehicles for Nod in the Renegade multiplayer.

The C-130 was not seen in Tiberian sun because of the evolution of VTOL technology and the increased frequency of ion storms.

The Hercules appears in Renegade. It is also seen in several cutscenes of Tiberian Dawn.

In a mission in Renegade Havoc hijack one to escape from Sakura's comanche only for to be shot down by the Nod Copter. 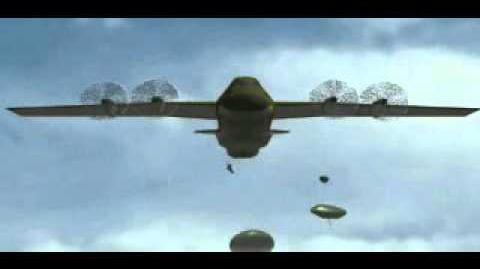 Retrieved from "https://cnc.fandom.com/wiki/C-130_Hercules_(Tiberium)?oldid=240744"
Community content is available under CC-BY-SA unless otherwise noted.