Cairo is the capital city of Egypt and the largest city in the Arab world. It is associated with Ancient Egypt as the Giza pyramid complex and the ancient city of Memphis are within its geographical area.

Cairo was seized from GDI forces by the Brotherhood of Nod during their first invasion of Egypt and a Nod supporting regime was installed there. It was recaptured by the GDI some time later before finally being retaken by Nod during their second invasion. 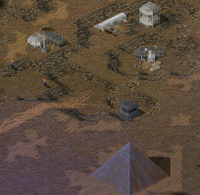 Outskirts of Nod-ruled Cairo during the Second Tiberium War

Eventually, General Hassan gained control of Cairo as he consolidated his power over Egypt, establishing control of Nod before governing as GDI's collaborator. However, when Anton Slavik rose to power and prior to Kane reappearance, Anton Slavik's rebels took Cairo and Kane established his main base there.

The Cairo area housed the World Altering Missile launch facilities which were also Kane's new pyramid and Temple of Nod. It was invaded in a daring raid by GDI commander Michael McNeil, who prevented the launch of the missile along with three ICBMs aimed at what was left of the Philadelphia.

After the end of the Second Tiberium War, a small Nod team evaded the heavy GDI security to retrieve the pieces of CABAL.

However, Nod did not simply let the area go into GDI hands. Instead, after the conclusion of the Firestorm Conflict and rebuilding efforts in Africa, Nod established their rule firmly here and begun construction of a massive underground missile silo complex, which laid masked for many years until the fateful day in 2047, when the silo was activated and a nuclear missile was launched against the GDI orbital command center, GDSS Philadelphia, obliterating it. After this, most of the masking nets and camouflage were removed and all launch operations transferred to a central, raised platform in order to speed up the loading times and launch cycles. The silo used to launch a missile against Philadelphia was shutdown and deactivated.

During the early stages of the Third Tiberium War, GDI invaded Egypt and destroyed the Cairo Nuclear Facility in retaliation for the destruction of Philadelphia. GDI troops razed Nod administrative facilities on the outskirts of Cairo, bringing Nod's long-time control of Egypt to an end.

Following the cataclysmic ending of the siege of Temple Prime, Cairo (and much of Egypt) was hit by the fallout and is classified as the R-1 Red Zone.