Capture Jake McNeil is the penultimate main mission in the Nod campaign of Tiberian Sun. 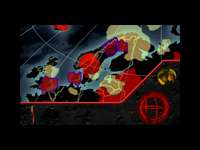 Jake McNeil, brother of one of GDI's commanders, will be leading an inspection tour to a small GDI outpost in this area. His knowledge of GDI activities could be of great benefit to Nod's cause. Capture the GDI outpost with engineers, then disguise the base as GDI's and wait for Jake to make his inspection. When the signal is given, use the Toxin soldiers provided to "persuade" Jake to join Nod's forces. Once he is under our influence, EVAC him at the designated site.

Be very careful not to alert GDI until we are ready to strike. If they detect Nod forces in the area, they will surely try to evacuate Jake. If GDI is alerted, be sure to get to Jake before he can leave the area.

Kane praised Slavik for his success in destroying the Mammoth Mk. II prototype, and ordered him to deal a fatal blow to GDI by destroying Hammerfest, their last stronghold. However, Hammerfest was well defended and protected by an impenetrable Firestorm wall, so Kane ordered Slavik to find a way to shut it down.

According to CABAL's analysis, Hammerfest's firestorm defenses are completely invulnerable. However, he discovered that Michael McNeil's brother, Jake McNeil, was stationed at Hammerfest. Jake would soon be leading an inspection to a small GDI outpost, and CABAL suggested that Slavik could capture the outpost before his arrival and kidnap him.

For this mission, several toxin soldiers were deployed along with a rocket soldier and an engineering team, as well as three captured Amphibious APCs. The team infiltrated the GDI outpost and captured it after the toxin soldiers eliminated a few guards. After this, they disguised the GDI outpost to hide the fact that it was captured, in order to lure Jake into a trap.

Once Jake McNeil entered the base, he was tranquilized and brought back to the extraction point, where he was taken away by a Subterranean APC.

At the start of the mission, load the toxin soldiers into an APC and move all three APC west. Stick to the southern edge of the map in order to avoid detection. Once you arrive at the designated location, destroy the cliff with the rocket soldier and move your APCs up the cliff.

Drop off the toxin soldiers and use them to eliminate the GDI Light infantry in the base, then capture the entire base with engineers. Once this is done, the base will be automatically disguised to GDI colors. Jake will soon enter the base by this point, move your toxin soldiers close to the door and attack him as soon as he enters.

Once Jake is under your control, order him into one of the APCs and immediately move him back to the starting point, simply drop him off and move him into the Subterranean APC to finish the mission.