Capture Umagon (New Detroit) is one of the two possible options for the seventh Mission of the Nod Campaign in Tiberian Sun.

The mutant female may be trying to reach the underground railway system located in New Detroit. Move in and control the station before she arrives. If she boards the train then it must be stopped. This may be our last chance at capturing the abomination.

When Nod forces loyal to Anton Slavik had returned to the Alien warship that General Vega had crashed on the Texas-New Mexico border they had expected to find the Tacitus where Kane had left it; within the bowls of the ship.  To their distress they had found that the Tacitus was nowhere to be found and worse Umagon's Forgotten forces had ambushed the Nod force and destroyed it, thus gaining it seemed control over the Tacitus.

CABAL calculated that Umagon would either return to the GDI medical colony near Provo, Utah or to the underground railway entrance in New Detroit. Nod scouts quickly determined that she was enroute to the second objective. Anton Slavik gave orders to the Nod forces operating in North-West Mexico to quickly send forces in order to allow him capture Umagon before she would be able to escape into the underground railway at New Detroit.

As Nod forces moved northwards from Mexico and towards New Detroit, Michael McNeil became alarmed as Umagon and her team's land route to the underground railway station was now cut off by Nod forces and she risked death or capture. Umagon however was stubborn, refusing to change her destination despite Nod's manuevre to intercept her. As a result Michael McNeil was forced to send an Orca Transport to her location and transport her to the railway station so that she could avoid being captured by Nod.

Nod forces arrived to the east of New Detroit, on the other side of the river.  There were two bridges over the river, but the northern bridge had been destroyed.  Bands of armed Forgotten roamed the streets of New Detroit, terrorising the civilian population and forcing them to hide in their homes; as the extensive GDI forces in the area turned a blind eye to their 'allies' activities.  There was also a GDI base in the town guarding the route to the railway station.

There were two ways that the Nod could have captured Umagon.  They could firstly had launched an assault on the GDI base and it's forces along with the various bands of Forgotten, capturing the railway station and capturing Umagon as soon as she arrived by Orca Transport. The Artillery unit that Nod forces had arrived with would then have been invaluable in eliminating the base.

Alternatively they could have outflanked the GDI, perhaps repairing the northern bridge in order to gain access to the raised area north of the base to gain access to a section of the railway track.  Once they had done that, they could have used their Rocket infantry, Attack Cycles and Tick tanks to destroy the train's locomotive and drag Umagon from the immobile train.

But regardless of how operation was conducted it was a success and Nod forces were able to take Umagon into captivity before she could escape the area into the underground railroad proper.

The triumphant Nod forced had captured Umagon and she was placed in the Montauk prison cell.  As the Montauk headed towards a Nod prison camp somewhere, Anton Slavik and Oxanna Kristos tried to question her about what had happened to the Tacitus but she wouldn't speak. Oxanna Kristos described her as a "disgusting specimum" but Anton Slavik was more positive asking why she had "betrayed her brotherhood" given she had "gained much from divination"; to which she replied "divination is a lie, it's killing us".

This indicates a serious difference of opinion between Oxanna Kristos and Anton Slavik on the subject of mutants existed.  Taking that an important goal of the Brotherhood of Nod during the Second Tiberium War was the universal divination of the human race as shown by their plans for the World Altering Missile; the transformation of the human race into a Tiberium-immune and resistant form akin to the mutants themselves, it would seem that Oxanna viewed mutants as a kind of disgusting divination parody to be eliminated in order to make way for true divines but Slavik on the other hand saw them as a representing an early if perhaps flawed form of divine that should embrace the Brotherhood of Nod.

Umagon attempted to commit suicide, which led to to Anton Slavik sending 2 Light infantry in order to restrain her. But her tiberium enhanced strength, combined with her commando training proved too much and she swiftly overpowered them, taking their weapons and making her escape.  Oxanna Kristos drew her pistol and was about to try and stop her when Anton Slavik realised that they should actually allow her to escape.

Unknown to Umagon they had attached a tracking device to her. She would be allowed to escape simply so that she would lead them to the nearest Forgotten base in the area, which might be where she had stashed the Tacitus after retrieving it from the Alien warship.

Nod turned a blind eye to her escape and as they had predicted she went right back to the main Forgotten base in the area. They now knew where the Forgotten in the area were based.  The way was now also paved for Nod to conquer New Detroit and overrun much Arizona, taking back territory that Michael McNeil had recently driven them from. The Nod flag now even flew over Phoenix, the site of McNeils earlier crucial victory. 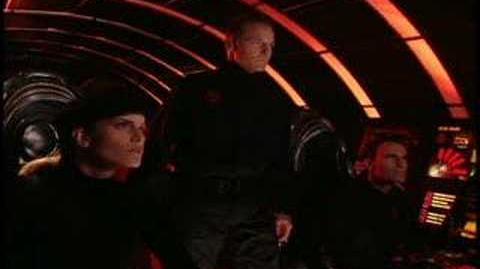