Capture Umagon is the sixth mission in the alternative Nod campaign of Tiberian Sun. Completing one of the two choices available is sufficient to proceed in the campaign.

You must reach the medical colony in the region without being prematurely detected by GDI and forcing a base evacuation. To prevent this, consider first destroying the three sensor towers protecting the base. Our new artillery unit should be sufficient for the job. Once inside the base, the capture of the mutant female should be easy.

﻿Slavik's small team had managed to reach the crashed alien ship before Vega or GDI. However it appeared that the Tacitus was not inside the ship. A Nod soldier reporting the situation was also strangled to death by someone hidden in shadow. At Slavik's insistence, CABAL had the strangler identified by filling in the missing details in the killer's image; and the killer was revealed to be the female mutant Umagon.

Thinking that she would have the Tacitus or at least know where the Tacitus was, Slavik had her tracked down and CABAL pinpointed her current whereabouts in the south-western United States. CABAL had earlier presented two possible locations to capture Umagon - at a GDI medical colony near Provo, Utah; or along the New Detroit railway line. Either way, Slavik could not afford his only lead to escape by train.

It had been revealed that she had returned to the GDI medical colony near Provo, Utah. The retreating Nod forces that had just been driven out of Nevada, were swiftly ordered by Anton Slavik to regroup and attack the Provo medical colony in order to capture Umagon.

By the time the Nod forces had arrived in the vicinity of Provo, Umagon had already made it back to the medical colony and was resting in its facilities. The retreating Nod forces had however managed to take with them 2 of their Artillery units and these units would be critical to the completion of the mission though they had lost the means to produce any more.

Nod understood that the moment they attacked the medical colony, Michael McNeil would swiftly evacuate Umagon by train to a more secure and unknown location. The only way to approach unseen would be to eliminate the 3 deployed Mobile sensor arrays in the vicinity. And they would have to this from a distance, otherwise they would just alert the GDI in the process of destroying the arrays.

Anton Slavik used his Artillery to destroy all the sensor arrays from a distance without alerting the GDI to their precise location.  Having done so he was able to launch an attack on the GDI buildings in the area close to the train lines, which finally alerted the GDI to his presence. Consequently the GDI tried to evacuate Umagon but Nod forces were now close enough to strike at her and as she attempted to flee the area by train, Nod were simply able to ambush and capture her either as she tried to change trains or by destroying the train she was aboard.  They then dragged her off to face Anton Slavik aboard his Montauk.

The triumphant Nod forces had captured Umagon and she was placed in the Montauk prison cell. As the Montauk headed towards a Nod prison camp somewhere, Anton Slavik and Oxanna Kristos tried to question her about what had happened to the Tacitus but she wouldn't speak. Oxanna Kristos simply described her as a "disgusting specimen" but Anton Slavik was more positive about her nature, asking why she had "betrayed her brotherhood" given she had "gained much from divination"; to which she replied "divination is a lie, it's killing us".

This indicates a serious difference of opinion between Oxanna Kristos and Anton Slavik on the subject of mutants existed. Taking that an important goal of the Brotherhood of Nod during the Second Tiberium War was the universal divination of the human race as shown by their plans for the World Altering Missile; the transformation of the human race into a Tiberium immune and resistant form akin to the mutants themselves, it would seem that Oxanna viewed mutants as a kind of disgusting divination parody to be eliminated in order to make way for true divines but Slavik on the other hand saw them as a representing an early if perhaps flawed form of divine that should logically embrace the Brotherhood of Nod. 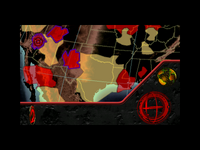 Thanks to Umagon Nod locates the main Forgotten base in the area.

Umagon attempted to commit suicide, which led to Anton Slavik sending 2 Light infantry to restrain her. But her tiberium enhanced strength, combined with her commando training proved too much and she swiftly overpowered them, taking their weapons and making her escape. Oxanna Kristos drew her pistol and was about to try and stop her when Anton Slavik realised that they should actually allow her to escape.

Unknown to Umagon they had attached a tracking device to her. She would now be allowed to escape simply so that she would lead them to the nearest Forgotten base in the area, which might be where she had stashed the Tacitus after retrieving it from the Alien warship.

Nod turned a blind eye to her escape and as they had predicted she went right back to the main Forgotten base in the area. They now knew where the Forgotten in the area were based. As Nod reinforcements poured into Utah, bolstering the Nod forces that had fled there from Nevada, Provo soon fell into Nod hands. They had now secured a good base from which to counter-attack and regain control of the territory that they had lost in Nevada and elsewhere.