The cargo plane was a plane Nod utilized to deliver vehicles onto the battlefield during the First Tiberium War. They landed vehicles on Nod Airfields.

The large cargo planes did not land at the field. Instead they slowly flew at extremely low altitude and released the vehicle from the aft cargo hatch as it passed over the gently inclined runway.

By the Second Tiberium War and the Third Tiberium War, these cargo planes were phased out of service due to the increasing frequency of ion storms, as well as the necessity of a high degree of secrecy during the planning phase of the war. Instead, Nod began relying on underground vehicle assembly facilities to build and repair vehicles.

In Command & Conquer: Tiberian Dawn, the cargo plane's flight path is always from the right side to the left side of the screen. Interestingly enough, the plane cannot be shot down or intercepted in any way which is most likely for balance because it would be unfair if Nod's vehicle supply lines could be cut off while GDI's cannot since their vehicles emerge from a weapons factory instead of being airlifted.

The plane that is used in the game to deliver Nod units resembles the C-17 ingame. For some reason the manual uses an image of a C-130 Hercules and calls it an Antanov AN-22. A cutscene shows a C-5 Galaxy attempting delivery but crashing.

Crashing.
Add an image to this gallery 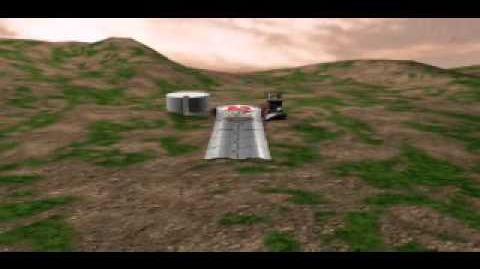 Retrieved from "https://cnc.fandom.com/wiki/Cargo_plane?oldid=230248"
Community content is available under CC-BY-SA unless otherwise noted.