The Centurion is a Nod Defense-class unit that resembles a giant infantryman.

The Centurion is equipped with a cannon integrated into its right arm which is effective vs. Medium-type armour. It is, for all intents and purposes, a mini-Avatar for the Defense Class whose main purpose is to destroy medium tanks and hold the line.

Its other arm is equipped with a reflective Energy Shield. The energy shield will reflect most (but not all) incoming lasers, bullets and shells. It has no effect on rocket or blast-type attacks, attacks from the flank or rear, or when the Centurion is moving. As befitting the Defense Class, the Centurion is most effective when used in defense, with its front facing the enemy. It is easily outflanked, though due to its only-average mobility.

The Centurion has Medium-type armour and is itself weak to cannon attacks, assuming they bypass the shield. They cannot fire on the move and must move their entire bodies in order to target an opponent. The shield only provides frontal protection and, even then, it only reflects some of the incoming fire, not all of it. It has no effect on rockets or blast weapons. 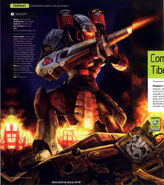 Retrieved from "https://cnc.fandom.com/wiki/Centurion?oldid=233962"
Community content is available under CC-BY-SA unless otherwise noted.