Immune to mind control and radiation

The Chaos Drone was an unmanned vehicle within Yuri's arsenal.

Like many of his forces, it made use of mind control but in a completely different way. Instead of trying to control its enemies, the Chaos Drone did what it name suggests and released a hallucinatory gas which caused enemies that were exposed to it to behave violently, even against their own forces. This would cause even a well ordered enemy column to collapse as the gas amplified the strength of the affected enemy, who would end up attacking their own comrades before attempting to fight Yuri's forces.

The drone was able to infiltrate many bases quite easily in order to cause this effect, its ease attributed to its fast speed and artificial intelligence driver, the latter of which also made it immune to mind control. Ironically, this makes the Chaos Drone uniquely useful against hostile Yuri forces, and quickly able to throw them into disarray.

However, the drone was very lightly armoured with no way of defending itself (other than releasing the gas). While fast, it's extremely vulnerable to base defenses, missile-packing enemies, and aircraft.

The drone's gas dispenser only works on conventional units; animals (like Attack Dogs), Robotic units, and high-level psionic units (Yuri Clone, Yuri Prime, Mastermind) are immune. A secondary issue is that the gas gives an attack boost to those within it, so it can potentially work against you if the berserk unit attacks your own forces. The hallucinatory effect is relatively short-lived, necessitating that the Chaos Drone either launch hit-and-run assaults, suicidal charges into the fray, or be backed up with other allied units. 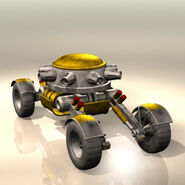 Icon with Chinese text
Add an image to this gallery
Retrieved from "https://cnc.fandom.com/wiki/Chaos_drone?oldid=229827"
Community content is available under CC-BY-SA unless otherwise noted.